When Will I learn?

Last year, Kate had only been in Day Care for a few weeks before the Holiday season began. I was new on the parenting circuit and I wasn't sure what the protocol for giving gifts to Day Care staff. I sent a basket of goodies from Wine Country Gift Baskets. I didn't receive any response, so I asked the director to confirm if it was delivered. "Oh yes. Thank you." was her simple response. In the December newsletter, she mentioned that she had received requests for the names of all the providers and I noticed there were stockings hung with the names of each provider. I had the impression that we were supposed to do something for each attendant. Gift cards are always the easiest and most practical gift. Which one? Starb.ucks feels too generic. Plus there is not a store near the Day Care Centre and I know not everyone likes their coffee. Tar.get would likely to be used, but it's not really a gift to buy toiletries and laundry soap. Same applies to Ama.zon. Maybe Barnes and Noble? A book is always the right size, but I could see some of the cards going unused. I decided to crowd source a parenting group on Face.book.

Okay. I get the message. Cash is King. Yet, I didn't want to just give cash. (Kathy Griffin did a very funny bit about how her foul mouth mother Maggie only wants cash for her Christmas gift and Kathy describes that it feels like a drug deal as she hands her an envelope full of bills) I wanted to do something creative with the small gift. I am pausing to reflect that while I resent being told that I'm becoming my mother, I seem to be working very hard to be like her. My mother is very creative. She was Etsy before there was Etsy. She can knit, crochet and sew. She had a small side business selling baskets that she made and she used to teach classes on basket making. She used to stencil and do bead work, I learned that nursing wasn't her first career choice, it was the only option that was available to her. She really wanted to be an art teacher, and she would have been really good at it.

Myrtle tried to talk me out of it. She confirmed that giving cash is what is expected. She tried doing cute ideas -giving personalised travel mugs and a gift card to a local coffee store- barely got a response from Little Myrtle's teachers. Last year she just gave cash and received many thanks. "It's just not worth it to make a big effort" she warned my deaf ears. I was determined that I could put together a few small tokens for Kate's attendants without much effort.

I had a $50 gift card to Ba.th and Body Works (BBW) that I received last year and never used, so I hit the travel sized bins to pick up hand cream, hand sanitizer, a candle and a lip gloss. I wanted to put these items in a small mesh bag. I looked in Mich.aels, and two party stores, but didn't find the right sized bag for my needs. I searched on Ama.zon and found the size and colours I was looking for. I had to ask my Dad to be my Ama.zon Prime bitch and order it with two day shipping. I hope he wasn't thinking that I was hinting at an Amazon Prime membership for a Christmas gift, although that would be a great idea. I figured that since Kate likes to put things into bags, she could help with this project. Sort of. She only wanted to put certain items in the bags and wasn't aware that the items really had to be placed in a certain manner. I had to fix some of her work, but quickly assembled the gift bags. 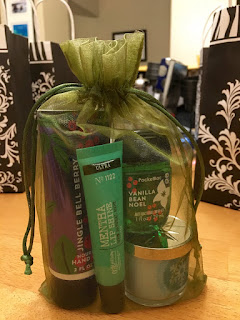 I also wanted to do some baking, so I decided to make some scones to include with the gift bags. I went to Cost.Plus World Market (CPWM) to pick up scone mix and small jars of clotted cream and strawberry jam. I had to bargain to get some Kate-free shopping time, as she would have been the proverbial bull in the china shop. Our local CPWM was out of strawberry jam -they only had apricot, which really wouldn't cut it. I tried looking on line for small jam jars, but couldn't find any. I considered going out to breakfast and stealing a bunch of small jars... I looked on line and found another CPWM about 15 miles away that has strawberry jam in stock. The store is next to a Costco, so I decided I could justify travel for such a small item if I combined a Costco run. I would later learn that the far away Costco doesn't have the same items as my local Costco, so I still didn't complete my shopping needs. 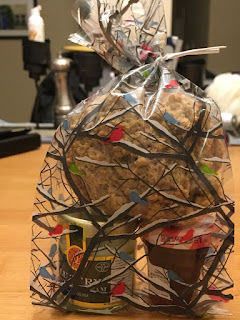 I picked up some money holder cards at Tar.get. The next task was getting some clean new, dollar bills with razor sharp edges. I think this detail separates gift giving from a drug deal. I tried to find some time to go to the back without Kate, but it wasn't happening. Fortunately I found a time when it was not too busy and she could be occupied with her milk. I asked the teller for some new bills. "We're all out." she informed me. "I've been giving them out all morning. You may want to try the branch on XYZ street" I asked her to pick out the best looking bills as I was not about to try another bank.

I placed Kate in her learning tower to watch as I made the scones. The mix is rather fool proof -just add water.  After the scones cooled (and Kate and I tested one) I assembled them along with the clotted cream and strawberry jam into some cute bakery bags I picked up at CPWM (before I found these, I was just going to put them in plain sandwich baggies). Finally, it was time to put the money in the envelopes, place the BBW items and the baked goods into the gift bags. I included some goat soap. There is a man empowered by a wheelchair who travels up and down the Farmer's Market selling home made goat soap. I pick some up every year to give as gifts. 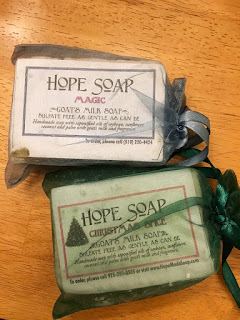 I had Kate do some colouring, so she could contribute to signing the cards. I addressed them to all the attendants whose names I knew off the top of my head. Then I brought up the email with the complete list of names. Somehow I was short by one. I counted the names again on the email. Six. I had six BBW bags, six bag of scones, six goat soaps and six money holder cards. I looked through the names again. The director (who works in the infant room) didn't include herself on the list. F-u-u-u-c-k! I was one bag short. I had already addressed a card and labeled a bag for the director, so I couldn't make an executive decision to give her some thing different. I would have to gather supplies for another bag. 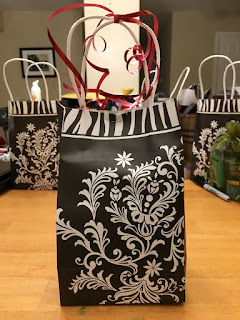 The finished product -only one short!

I loaded Kate into the car and made my first stop to CPWM in a dodgier part of town while it was still light out. Other people had this idea, as I had to circle the car park twice before a spot became available. Kate had fallen asleep, which I knew would screw her up for going to bed, but it also made an easier trip to CPWM. Fortunately, the had the clotted cream and strawberry jam in stock. I checked in with Face.book while I was standing in the queue and saw a news story that a woman was robbed at gunpoint right near the restaurant where we had our department party the previous night. They suggested not shopping at night and not going alone. I began to question why I was doing this. I made it back to my car safely and to my surprise Kate slept through transitioning from her stroller to the car seat. It's only 8 miles to BBW in a straight shot right down the freeway, but my GPS was suggesting it would take 37 minutes due to rush hour traffic. Even with the metering lights no one was getting on the freeway. It was total gridlock. I decided to take a longer route that passed my house as I knew the traffic, although thick, would at least be moving. As I got closer to my exit, I really considered bailing on this whole project and going home; but then the traffic cleared. I pressed on.

I gave Kate a turkey packet so she could start on dinner while I drove home. I fully expected her to spill the packet everywhere, and I would have deserved it. Yet she ate it completely and even screwed the cap back on when she was done. She barely made any mess. She made me so proud and I felt even more guilt. Three hours had passed since we left the house. It was bath night too. I finally put her to bed around 8:15, despite taking an almost hour long nap between 5-6 PM, she was tired and fell asleep quite easily while I finished assembling the gift bags. I used the cash back option while paying for the extra items, so I had more bills to select the best looking ones. I ran them under the iron and found they looked almost knew. I wished I had ironed all the other bills, then I started wondering if I've gone insane. I had to do some left handed scribbling to fake Kate's drawings. 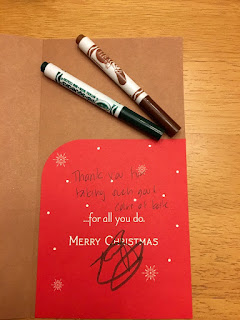 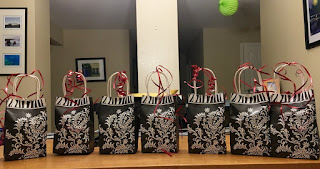 For those of you who know me in real life, please remind me of this episode next year, if I decided to get creative with my Day Care gifts next year. Cash in an envelope will be just fine.
Posted by jAllen at 21:19 10 comments: