The final days at Kate’s old Pre-School were difficult emotionally. And awkward. I didn’t tell the other moms that we were changing Pre-Schools. Husband broke the news at Kate’s birthday party. Part of the reason is because I struggle with crucial conversations (as I’ve learned in my leadership classes) and the other reason is because I felt like a dick. When we started looking at other schools and I saw how competitive the process could be with long wait lists, I went into self protection mode. Hey, it’s a dog eat dog world. I kept the details to myself to eliminate the competition. Although I knew they weren’t looking for other schools since they both have a younger second child and had commented that it’s hard to find sites that provide both infant and toddler care. Maybe the real issue was that I was feeling left out as I didn’t have a second baby.

Anyway, as if they were making a final plea to keep us enrolled, her Pre-School held a Science Fair on Kate’s last day. We had just picked up a book of 101 Science Projects to do with your kids at home and I opened to the page with a Make Your Lava Lamp. You only needed a Mason jar, water with a few drops of food coloring, vegetable oil and add Alka Seltzer. I won’t deny it; I wanted us to have the best project in her class. As we were cutting circles for the poster board, Kate asked me “Mommy, are you doing this for you or me?” Then to answer her own question, she apologized as it was “her fault” that I had to do the project. 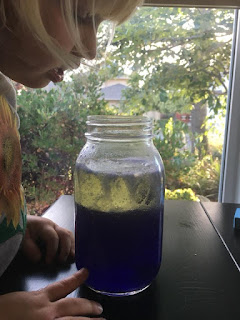 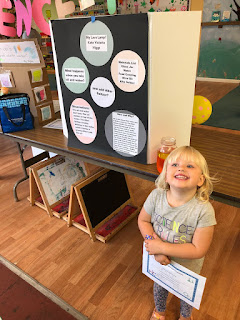 I dropped her off that morning and it was the first time in months that she didn’t cry to cling and I left quickly and wiped tears away as I walked to my car. My afternoon schedule was too heavy for me to attend the Science Fair, so Husband went instead. I had wanted him to wear his “Back Off, I’m a SCIENTIST” T -shirt (quoting Ghostbusters’ Peter Venkman) but apparently it’s a designated night shirt. He did wear a work shirt that displays a chemical molecule, which is actually the structure of Viagra. Fellow chemists who can recognize what it is can enjoy a tee-hee-hee together. Actually, as Husband’s former boss was fired due to sexual harassment and misconduct… maybe it isn’t so funny…

A few weeks earlier, when he was picking her up at the end of the day, Husband asked the lead Pre-School teacher about how Kate was doing. “Very well” was the response. “Actually she’s ahead of most of the class” Hearing that sealed the deal. I knew we were making the right decision to switch her to the Montessori school.

Yet, change is hard; even when it’s good. We started Kate’s phase in with having her attend one hour on her first day, two hours on the second day and she worked up to a six hour day. When I picked her up on the second day, she was out of the playground playing with three other kids calling out, “C’mon friends!” She seemed to fit in well and I was getting reports from her teachers that she was very receptive and they were impressed with her verbal skills. Yay, we wouldn’t have to extend her phase in until the official start of school, which would have required Husband or I to have to take time off from work.

One of the annoyances with the new school is that they do not provide lunch, so I have to pack a lunch every day (they also don’t have a fridge, nor can they heat foods, which I’m not sure how that is allowed in over-regulated California, but it really limits options). They also insist that we don’t pack any sugary treats. I’m a health food advocate, so that sounds good to me! Except I didn’t know how strict they would be. I got busted for a small 60 calorie box of yoghurt covered raisins. I really had to bite my tongue and keep my eyes from rolling back, as one of the teachers lectured me (a 4 time Whole 30 Veteran) about sugar and how I should not give Kate anything with more than 5 g of sugar. For fuck sake, it was yoghurt covered raisins, not Twinkies and Pixie Stix! I spoke with a mom friend who’s kids go to a different school, but has similar rules. She feels it is a little intrusive. “I’m the mom. I should be the one to say what goes in their lunch” BTW do you know how few foods have less than 5 grams of sugar? 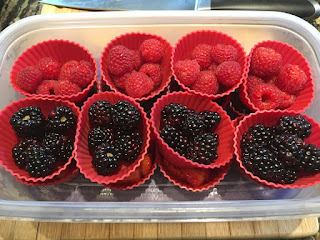 When we signed Kate up for the new Pre-School, she was still still two years old. The charge a higher rate for kids under 3 and those who are not potty trained, as they seemed to not believe that children could be potty trained under the age of 3. Upon her arrival, we reminded them that she is potty trained and had the extra fees credited toward our tuition for September. Then on the first day she stayed for nap, she had an accident. [face palm]. She had two other accidents and we had to bring in pull-ups for her nap time (although we’ve been getting reports that she is keeping them dry). We haven’t heard from the administrators that we need to pay for the potty training fee, but if they do, I think I’ll argue that it’s a big transition. You can’t be surprised to have a miss or two.

In anticipation of her attending the new school, Husband suggested that we get her some nicer clothes. Hey, I didn’t need to be told twice to go shopping! Although she doesn’t need to wear a uniform, I saw a few stores had a “uniform collection” of basic skorts and polos. I picked one out for her during her second week of school. She resisted getting dressed (which is usually for her) but really didn’t want to wear the skirt. As in she was pulling it down and bearing her butt as I was trying to put her in her car seat. She calmed down quickly as we were driving and I was hoping that she would get over her dislike for her skirt, but once we arrived at school, she started to pull it off again. I quickly directed her to the bathroom and changed her into her back up clothes. Later that evening, I asked her why she didn’t like the skirt. Her response “it’s not pretty” Sigh. I went to Jo.ann Fabrics to purchase a bunch of iron-on patches and I let Kate help pick them out. Since I don’t trust the iron-on process, I tacked down the patches with some loose stitches and as I was sewing, I couldn’t help wonder ‘is my kid just a tad spoilt?’ 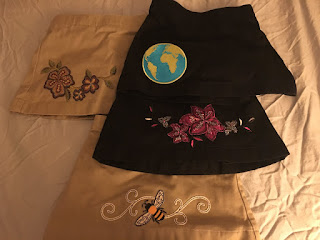 On the first day of school I selected two outfits and gave her a choice, you know, like you do with husbands. Kate decided she would pick out her own clothes and grabbed the first two things in her drawer, which were grey leggings and a blue T-shirt. All I could say is that it at least sort of matched. I didn’t imagine she would have camel toe on her first day of school pictures. When I came home that night, I moved all her play clothes to the top drawer and filled her bottom drawer with her school clothes. #momskills. 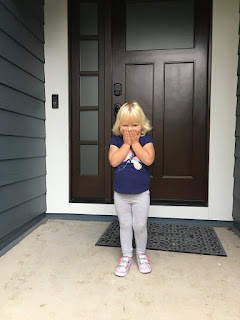 Not the Picture I had in Mind

My work schedule shifted by 30 minutes with this new Pre-school change, and I have to say, I appreciate the extra time in the morning. We have to leave at 8:15 sharp, where we used to leave between 7:50 and 8:00. Despite the pressure to be punctual (we need to arrive at school by 8:40, so I can leave at 8:45 and arrive at work by 9:00) our mornings have felt more relaxed and less hurried. This does put a little more pressure on our evening, as the first thing I learned during our first week is that I have to get dinner on STAT. As her new school is providing so much extra stimulation, she’s a bit tired and cranky when we get home. Throw being hangry into the mix, and it’s the recipe for an Epic meltdown.

I know some kids are doing their phase-in, but it looks like Kate is the last kid to get picked up each day. I was fearing they would ask us to move up her pick up time, but so far no one has said anything to us, and we’re pretty psyched that Kate gets some one-on-one time with her teachers. We’re only two weeks in, and I’ve been on time for every pick up. My secret is that I leave my desk at 5:28 and start walking to the parking garage, so that I’m getting in my car to leave at 5:30. I do realise that leaving two minutes each day translates to a loss of 10 minutes per week, and 6.5 hours per year, but I’m just hoping no one takes notice.

As expected, she was clingy and crying at her first drop off, but by the time I sorted our paying her fees, the crying seemed to stop. I had the opposite problem when I came to pick her up, she was refusing to come with me and was even running away. I know Montessori is supposed to be all about gentle discipline, but I think the teacher who was waiting to leave approved my ‘I’m going to pick you up and throw you over my shoulder’ technique. Yet after a few days, I started finding her sitting at a desk, coloring or working on a puzzle. When I arrived, without any prompting she starts to clean up and put away her materials. Who is this child and what have you done with mine?

That has been the biggest progression after a 5 week break for full time Day Care/Preschool; Kate’s behavior is much better now that she is back in a routine. We still have struggles with getting dressed and eating dinner, they just seem more manageable and everyone seems less frustrated. We’re three weeks in and it feels like it was the right decision and the right move.