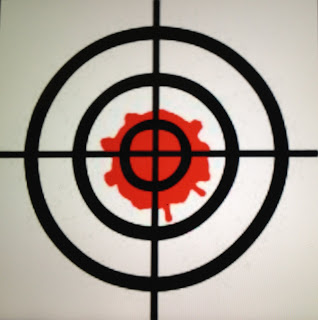 After the disappointment following my third Clomid cycle, it was an easy decision to stop it for a while. It's not working anyway, and I was curious to see what my ovaries would do on their own. It was now May, about to be six months since we 'officially' started trying, the call to action point for women over the age of 35. I went back to the ritual of POASing every morning and was surprised when I got my happy face on day 11. Wow, the Clomid may have jump kicked my ovaries into action. Somewhat skeptical of these results, I continued to test and had another happy face on day 15, which was consistent with my Clomid cycles. I figured the first result must have been a fluke, a weird false positive.

Meanwhile, Husband and I had successful coitus on both nights, but also allowed ourselves to be spontaneous. We had sex on the night of my birthday and the night before I left for a trip to Toronto, as that's what we would do if we weren't TTC. It felt like our best efforts to date. Still curious about these multiple happy face results, I had bloodwork done to check my progesterone level one week after each result. The first was on a Friday night, just before I boarded my flight to Toronto and the second was on Tuesday, when I returned. I saw both results at the same time. Friday was 0.4 (indicating no recent ovulation) and Tuesday's result was 6.9, indicating that I ovulated in Toronto. When I was away from my husband. It feels like the Universe is telling us "Hey, you're failing at this already, might as well take you out of the game completely!"

We soon learn that it may not have mattered too much as Husband received his semen analysis and there seems to be a few issues. The volume was low, as was the concentration (14 million). Motility and progression were okay, morphology could not be analyzed. In a weird way, it feels a little comforting to have some kind of explanation, even though this is not the information we wanted to hear. If I could have made a deal with the Universe, I would have asked to not have Husband be the cause. Maybe as women bear so much of the burden with the process of procreation, it seems natural that we want to accept responsibility for infertility. It's easy to look at me and attribute the cause due to my age.

One of my favourite comments about men and fertility comes from a TV show in the early 90s called Homefront. The show followed several WWII veterans who returned home in the 1940s. One goes to the doctor to discuss that his wife is barren, after all, "we've been married six months, and she's not pregnant." Little did the GI know that his English war bride was secretly using a diaphragm. The doctor was not seen on camera, but his voice asked follow up questions regarding the former soldier's performance. "I do my part" he said defensively. "I'm not talking about successful intercourse" explained the doctor, "I'm talking about successful impregnation." "Do you know what sperm are?" He earnestly asked, "Yes! Of course!" sneered the vet, insulted to even be asked such a question. "Good." said the doctor "Then you won't make the mistake of confusing sperm and masculinity. I told this story to Husband, and then asked "would you think that I am less of a woman if I didn't have any eggs?" Yes, he replied. "Seriously?" No, he informed me "I had to say something to counter you as you made a really good point." I remind him that he's not alone in this situation and my irregular cycles aren't helping our situation. Yes, he summarized "Your ovulation is a moving target and I've got a limited supply of bullets..."
Posted by jAllen at 22:49