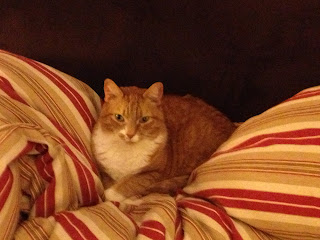 When I was 20 or 21, I had three aspirations for my life; I wanted a career in women's health care, a ginger cat and a manual transmission VW Jetta. If I accomplish nothing else in my life, I can say that I fulfilled the goals of my younger self.

As soon as I had my first real job and settled into my own place, it was time to acquire the cat. I went to the local shelter and fell in love with A from the moment I saw him. I knew he was meant to be my cat, although I had to go through three interviews with the staff at the shelter. His foster mother commented that he was a feral cat, but despite his instinctive skittishness, she felt that he had the potential to be a very loyal companion. I brought him home, but he remained extremely shy and fearful and hid from me. Six weeks later and I hadn't come close to petting him, friends and family asked if I considered returning him to the shelter. I couldn't do it, as he either wouldn't get adopted, or would be just as scared in a new home. I was stuck with a dud of a cat.

Then one day I noticed his eye looked crusty and he was rubbing it with his paw. Suspecting conjunctivitis, I made an appointment with the vet, without considering how I would get him there. It took forty five minutes of chasing around my apartment, moving furniture and eventually dragging him out from under my bed. As I drove to the vet's office, I figured there was no hope for our relationship. This cat now hated me. It turns out he did have conjunctivitis and the vet prescribed a steroid eye drop and antibiotics. I gave him his medicine as soon as I got him home, figuring he was already pretty pissed with me. I was planning to go to the gym and leave him in peace for a little while, but as I was nearly out the door, I looked back and saw him hiding under the kitchen table with a sad look in his eyes. Carefully, I approached him and to my surprise, he didn't run away. Slowly, I picked him up and moved to the couch. Once I sat down, he just melted in my lap and started purring loudly.

That night transformed him into the affectionate and loyal cat he was predicted to become. He sleeps beside me at night, he greets me when I come home from work. He loves to be petted and held. A is such a great companion, it helped feul my anti-baby arguement in my pre maternal instinct days. How could having a baby be better than what I had with A? Feeding and elimination management was much easier. We could leave A at home and go out whenever we wanted. A would always give me unconditional love and would never talk back or sass me. As A is an indoor cat, I would never have to worry about him staying out with friends and coming home late. Plus, he's much less expensive!

Husband was trying to convince me that there really is something special about seeing something that starts out at the size of a 7 pound loaf of bread grow into a whole person. "You can't play tennis with A... and just think how proud you'll be when junior scores his or her first goal..." I responded that no child of a goalkeeper and sweeper would be a pansy forward -defense is where it's at! I guess that comment revealed that I had been thinking about procreating and was warming up to the idea, but his follow up line melted me a little more, "We should have a baby sooner than later, so he or she will get to meet A and know what a great cat he is." I have wondered about how things would change for A if we had a baby, ultimately fearing that he or she would pull his tail or dress him in doll clothes. I often noted that when I visited friends with new babies, their cats would flock to me, starved for attention. One friend gave her cats away when her first son was born. As if, 'I have my baby now, I'm done with my cats...'

Shortly after my hysteroscopy, I started to take note that I was filling the cats' water and food bowls more frequently and I needed to replace the litter more often. These are cardinal symptoms of diabetes in humans, are they the same for cats? I had my answer when I picked him up one night and could tell that he had lost weight. I expressed my concerns to the vet, but she thought hyperthyroidism was more likely. Two days later I had a voicemail on my phone, "You were right, A has diabetes." I felt so satisfied that I was clinically accurate, but I so wished that I could have be wrong. Soon I was pricking his ears to check his glucose levels and injecting him with insulin twice a day.

I told Co-worker about A's diagnosis and she responded that her cat is also diabetic. "Do you give her insulin?" asked a medical assistant. "Um, no." she replied "it's a cat" not so subtly implying that I am crazy cat lady. Although I confess that I've been feeling like I am Angela from The Office, but how could I not give him the treatment that he needs? He's still maintaining his usual quality of life, finding new places to sleep, playing with his sister and he's as sweet and affectionate as ever. From the moment I adopted A, I've always accepted that a day would come when we say goodbye. Admittedly, it's harder to think about losing my kitty baby before I have a human one. However, I promised him that as long has there is quality in his life, I will fight for him and I will take care of him, until he tells me to stop. 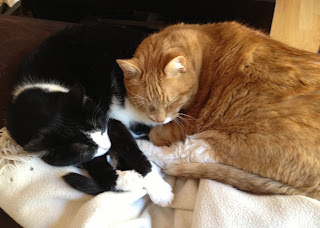 End Note: A adjusted to his new high protein diet and is doing great with his insulin injections!
Posted by jAllen at 05:24