The Waiting is the Hardest Part

The first night after my transfer, I dreamt that I was pregnant with twins and my bump was so big I could barely stand up straight. Then my water broke at 25-26 weeks and the doctor caring for me was one of the perinatologists I worked with while I was living in Connecticut. He came into my hospital room and said, "Twins, Jane?" with the same irritated tone and look of disdain that I received if I answered a question incorrectly during morning report. I am somewhat taking this as a good sign, as none of my other pregnancy related dreams have come to fruition and for that matter, I never did sleep with my Kiwi crush. I wonder if he has a nice deck... 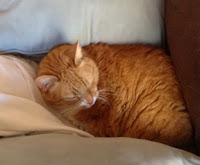 Animals are so remarkably perceptive. My cat, A, would sit near me as I was administering my shots and he snuggled by my side while I was recovering from my retrieval. I think he knew before the embryologist and my RE that we would be doing a day 3 transfer as he was really chatty and especially clingy that morning. I somehow felt that he was trying to alert me. Our other cat, K, just enjoyed playing with the Q-caps.


I've had a few cramps and the odd wave of nausea, but I am not going to apply any meaning to any symptom. I figured if I could have been misled by inserting progesterone suppositories into my hoo-ha twice a day, then inserting them three times a day and injecting PIO into my hutt every other day has the potential to have the same effects.

If this transfer doesn't work; I can allow myself to be disappointed, but not devastated. It does not render a verdict that I will never be pregnant, just that it wasn't meant to be this time.

I shouldn't think this far ahead, or think this way at all; but if at some point IVF succeeds in producing a take home baby, then I'm entitled to an 'Infertile Women are Smug' moment. I can show Myrtle the first photo of our baby as a 9-10 celled embryo and ask, when did you first see your baby? 8 weeks and 4 days? ...yeah...I WIN.

There is a new nurse at my RE's office (creatively named, 'New Girl') who is much more personable than Misery (although she has thawed quite a bit). When she called to review the instructions for a tentative day 3 transfer, she asked how I was feeling and I expressed that I wasn't encouraged by our numbers. She didn't say anything cliche like, 'it only takes one!' or recount a case of a patient who had a million to one odds and got pregnant. I don't think anything she said to me that was enlightening or particularly poignant. It was just comforting that she listened to me. When I called her after my transfer to detail when and where I would be doing my HCG, she greeted me; "What's up Girlfriend?" While I really appreciate her warmth and personal touch, I wasn't sure I was ready to be addressed as 'Girlfriend'.

My post transfer instructions noted 'No intercourse/orgasm for 5 days'. I waited until exactly until the end of 120th hour to lift that restriction.

After watching many progesterone capsules wash down the sink as they slipped from my fingers while holding them under the tap; I finally noted that it would be a good idea to close the drain.

If I needed to distract myself from thinking about what may or may not being going on inside my uterus, I would watch this video. Warning: It contains some inappropriate content and slightly mocks the New Zealand accent.

I went out with a few friends to a club in the city that was featuring an 80s night. There was a woman who looked to be about 6 months pregnant who was dancing away. I looked at her and thought, perhaps that could be me.

I've been refusing to consider myself Pregnant Until Proven Otherwise (PUPO). Although technically accurate, it still feels like I'm tempting fate.

Watching our embryos being placed in my uterus was really fucking cool.

I was so hesitant to pursue IVF because I feared weight gain. I dreaded the thought of putting on ten pounds before I even became pregnant. I actually lost one pound during my stimming, and although my weight crept up three pounds on the day after my retrieval, I was down four pounds by the time of my transfer. I was especially fearful that the IM PIO would pack on bulk, but I somehow lost more weight and went under 150 for the first time this year. I stopped swimming two days before my retrieval and haven't done any exercise since my transfer. What gives?

Sixty hours from having my blood drawn for my beta test and I have absolutely no idea which way this could go...
Posted by jAllen at 21:59