Nothing to show for it

I don't keep any formal record or list, but I carry a mental tally of my patients who have miscarried but returned with a successful pregnancy. I'm also aware that there are a least an handful who haven't found their way back. While I was stimming, I had a horrible day where three of my new OB patients were non-viable and I picked up another one the next day. For two women, it was their first pregnancy and it was the second one for the other two. Three were under the age of 30 and all of them were pregnant again by the time I did my first FET. The fourth woman just recently turned 39 and she was the one for whom I had the most concern. She had emailed me in January, with an 'I want to make sure we're doing everything correctly' inquiry, as she had become pregnant rather quickly with her prior attempts. I discussed the challenges with her age and offered some ovarian reserve testing for her, but she passed at that time.

As I was in the prep for my second FET, the fourth patient emailed me to announce her positive test. After wading in the cautiously optimistic waters until her second scan at 8 weeks, things seem to be moving well for her. During this time I also saw a 43 year old patient who had her first baby months after her 40th birthday. She waited a year before trying for her second, and sadly she proceeded to have four miscarriages in the past two years. She declined any testing or intervention, but proclaimed that she was waiting for one good egg if it were to come her way. At last it did. She's now in her second trimester and her MaterniT21 testing was negative. If this pregnancy goes the distance, she will be my second patient to have two babies over the age of 40 without assisted reproduction. Another patient who had a D+C at the same time as me and was also found to have a trisomy, messaged that she is pregnant again. Just to add to this Rainbow Baby Boom, a patient who used to see my RE, but switched to another clinic as she didn't like his bedside manner, is on my schedule after her presumably first IVF cycle was successful.  Oh, apparently it's contagious in my office as one of our receptionists is pregnant. I heard her mention that she's due in early December, which means she must have been still smoking the post coital cigarette when she announced her pregnancy.

I am finding it interesting that I can care for patients with unplanned and undesired pregnancies and not feel any envy. I merely remind myself that they are fertile. I am not. I can't relate to their experience at all, and I know I probably never will. Yet, I feel more of a kindred spirit to my patients who have a miscarriage or two under their belt. I know what it feels like to want something so badly and to have it pulled away from you the moment it's in your grasp. I'm ashamed a bit to admit that while I'm so delighted to confirm a viable pregnancy for these patients and share the news that their Rainbow Baby is on the way, I'm stabbed with a few pangs of jealousy. Will it ever be my turn?

A year or so ago, I attended a lecture on recurrent pregnancy loss and the speaker made a point that these women are not infertile. In my notes, I jotted the word infertile and drew a 'No' symbol around it. My patients were not infertile, they were just unlucky at that time. In particular, the former mutual patient is not infertile; her husband had a vasectomy reversal. Isn't it nice the way men can have a second go around raising kids with the younger wife #2? So where does that leave you if you are infertile and unlucky with your pregnancies? Well, screwed is the obvious answer, but I have to remind myself that I'm actually fortunate to have an explanation for our infertility and losses.

Heading into to beta day, I felt that I really couldn't read this one. It seemed rationale to prepare for disappointment and hope to be pleasantly surprised. I imagined Misery's message with both scenarios. Just before my afternoon session began, I grabbed a progesterone suppository from my purse and headed for the bathroom. As I was positioning to insert, I accidentally dropped the tablet on the floor. Shit. It's a fairly long walk back to my desk. Then the little voice inside my head spoke up. It doesn't matter. You're going to be stopping the progesterone anyway...

There were two patients already waiting when I was back at my desk. If my results were positive I would just take a double dose in the evening. One of my new OB patients that afternoon was actually a client of my RE's partner. She hadn't selected an OB at the time of her discharge, so we didn't have any of her records. I was going to have to fish for details. She was only 30 and had tubal factors. She ended up doing a freeze-all, as it sounds like she had a bad reaction to the anesthesia used for her retrieval and was sick during the prospective time for a fresh transfer. I guess when you have lots of eggs, you're under for a longer time. "How many did you transfer?" I asked. "Two embryos, but only one took." If she only had one stick, then we're fucked... My last patient of the afternoon is one very well known to me. She had a blighted ovum with her first two pregnancies before delivering her Rainbow Baby last year. Her ultrasound found a single, viable pregnancy at 6 weeks and 5 days. "It must be nice to give me good news for a change!" she exclaimed. "It sure is!" I replied with a genuine smile. I'm due for some good news myself...

I waited until the end of the day to listen to the voice mail with my beta results. It just seems odd to pause and take a phone call that will deliver such game changing news, and then carry on working. This time it was also awkward as Husband was on the east coast for a field hockey tournament and was three hours ahead of me. Her message was 32 seconds long, almost the same length of time as my positive result. Maybe there was a glimmer of hope...

"Hi Jane, It's Misery from Dr. Somebody that I Use to Know's office."
"I hope your day is going well." Fuck, she's stalling
"We received the results of your HCG test.." No shit, isn't this why you're calling?
"I'm really sorry Jane, it was negative... less than 1." the final embie couldn't even muster a chemical pregnancy...
"Dr. STIUTK wants you to stop your meds (already a step ahead of you) and he says to call of cycle day one and/or when you feel up to moving forward. He would like to meet with you to discuss your next steps."
"Again, I'm very sorry about the outcome. We'll talk to you soon."

As soon as I walked through my front door, I went through the routine that has become all too familiar. I tore off my estrogen patches and packed up my progesterone until next time. I ripped up my medication schedule. I refused to take my regular multivitamin, as I know it's underlying intention. This time I cried. A lot. The tears flowed easily for the rest of the weekend and could come out of the blue. I didn't need much to set off the waterworks. Musician at the Farmer's Market performing John Lennon's 'Imagine'  -cue sniffling. Acknowledging how much we already love this baby who may never exist -and the sobbing starts. Lamenting frustration of the failure of IVF#1 and feeling uncertain about the prospects with IVF#2 -now I'm bawling.

IVF was supposed to work. The whiney petulant child inside my head is throwing a tantrum. Much like little Myrtle as Myrtle offered to send me videos of such an event to serve as birth control. I keep thinking back to our initial consult where my RE projected that our chances with IVF were "good". Although 'good' was defined as a 40% success rate, and at that time the wise-ass in me questioned how a prospect with a 60% likelihood for failure could be viewed favourably. Realistically, the odds leaned toward failure. This actually wasn't supposed to work.

Now we're facing the situation that was my ultimate fear when we were deciding whether or not to take the IVF plunge; our first cycle is complete and we have nothing to show for it except the bills. Six months have passed since I started stimming. IVF was supposed to increase efficiency. One cycle produced four usable embryos, but none could go the distance. While recommending my desperation day 3 transfer, my RE described that the worst case scenario would be having no surviving embryos. Now I feel that I would have preferred that alternative. We would have saved a lot of time and resources. I've also developed a new appreciation for my day 3 embies. Damn, they got the job done -lethal anomaly and all. I renounce my position as a day 5 blastocyst snob.

I replayed Misery's voice mail a few times. Funny, I only listened to her message with my positive result only once. Now I can't bring myself to delete it as I want to have a record that someone once said, "you are pregnant" to me. I focused on her words and [pause] or when you feel up to moving forward and tried to detect any hidden infliction. I'm sure it's a standard message that they often use with patients with multiple failures, and I even acknowledge that I encouraged my own patients to decide when they are ready to try again. Still there was a part of me that was hearing her say 'so if you're dumb enough to continue this futile pursuit, let us know when you're ready to have your heart crushed again...'

Well apparently I am. It's onto anther WTF appointment with my RE. I'm curious to see how he'll try to put lipstick on this pig of a cycle and find any optimism within the opportunity of a second attempt. It's just such a fucking gamble. Maybe you'll win, maybe you'll lose. I'm starting to feel like Charlie Brown, who believes that one day, Lucy will be true to her word and will let him kick the football. 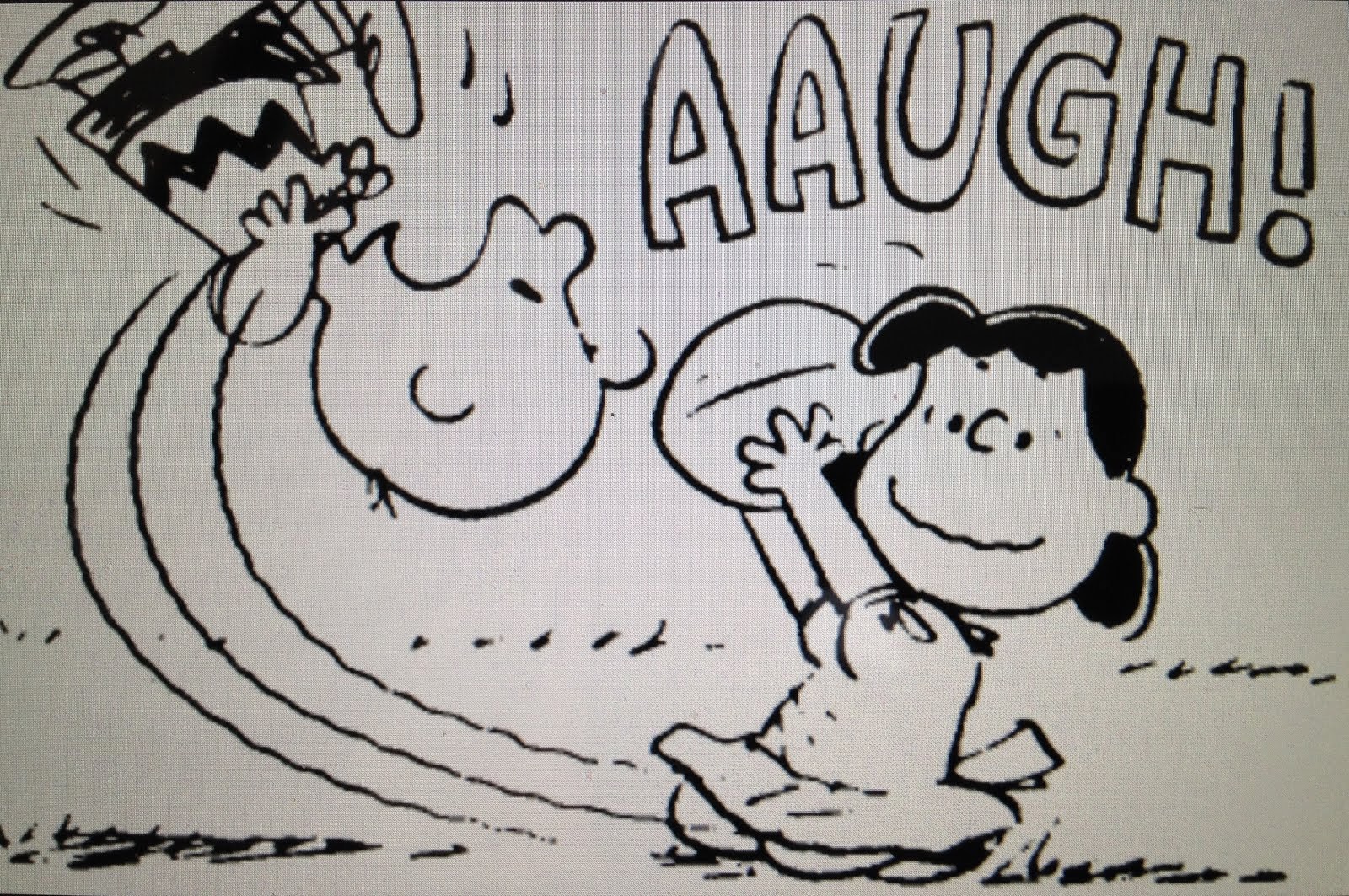