Do you think he knows there is a baby in there?

About a week or so after Angus's death, I announced that I was going to start interviewing potential candidates to fulfil the cat vacancy that had opened up at our house. Like hiring an employee, it was essential that we select the cat that would best fit within our family. Tyler's sweet face invited me to view his profile, which read "his resume boasts of lap-sitting, non-stop purring and looking supercute". It was a little eerie that the word 'resume' was used, as it fit just to perfectly with my interviewing approach. I had the feeling he was the one, and naturally, Tyler aced his call back.

Of course, I had to go through my own interview process to be approved for his adoption. His application form asked many details questions about our home life, including if we had any children in the house. Fortunately, this agency didn't ask is we had plans for children. When my friends Sam and Diane suffered a miscarriage, they decided to adopt a cat while they were waiting to try again. Hitting on a sensitive nerve, the shelter director asked if they were planning to have kids any time soon. When Diane admitted that they were, the director put her pen down and informed the couple they were considered unsuitable for adoption. "I've seen your type before." she explained "Once the baby comes along, you'll neglect the cat." Sam and Diane went to another shelter, this time they were prepared to lie if they were asked the same invasive question. Diane also employed a different tactic, she expressed interest in an older, hard to place cat. The rejection that she experience from the first shelter made her sympathetic to the cat that no one wants to adopt. Diane would go on to become pregnant with twins on their first attempt after her miscarriage, but the cat was actually a good fit for their soon to be expanding family. She actually prefers to be left alone, but she gets fed in the morning, finds sunny spots for her naps and sleeps on the foot of Sam and Diane's bed each night. For her, it's a great life.

It did give me pause to consider that not only was Tyler going to have to adjust to a new home and new family, he was going to have to learn his supportive role to an infertile couple. I once asked Husband if he thought Angus was aware of what we were going through with our fertility treatments and miscarriages. "I think he sensed the tension" Husband speculated. He sure did. He just seemed to know when I was down and in need of some kitty therapy. I just had to hope that Tyler was going to be a quick study. He had only been with us for about two months by the time I did my fourth transfer, and I don't think he was too aware of what was going on, although he did sit on my lower legs while I was resting. Two months later, when we did our final FET, I think he had a better understanding. Post transfer, he snuggled right on my lower pelvis as if he were acting as an incubator for my uterus. 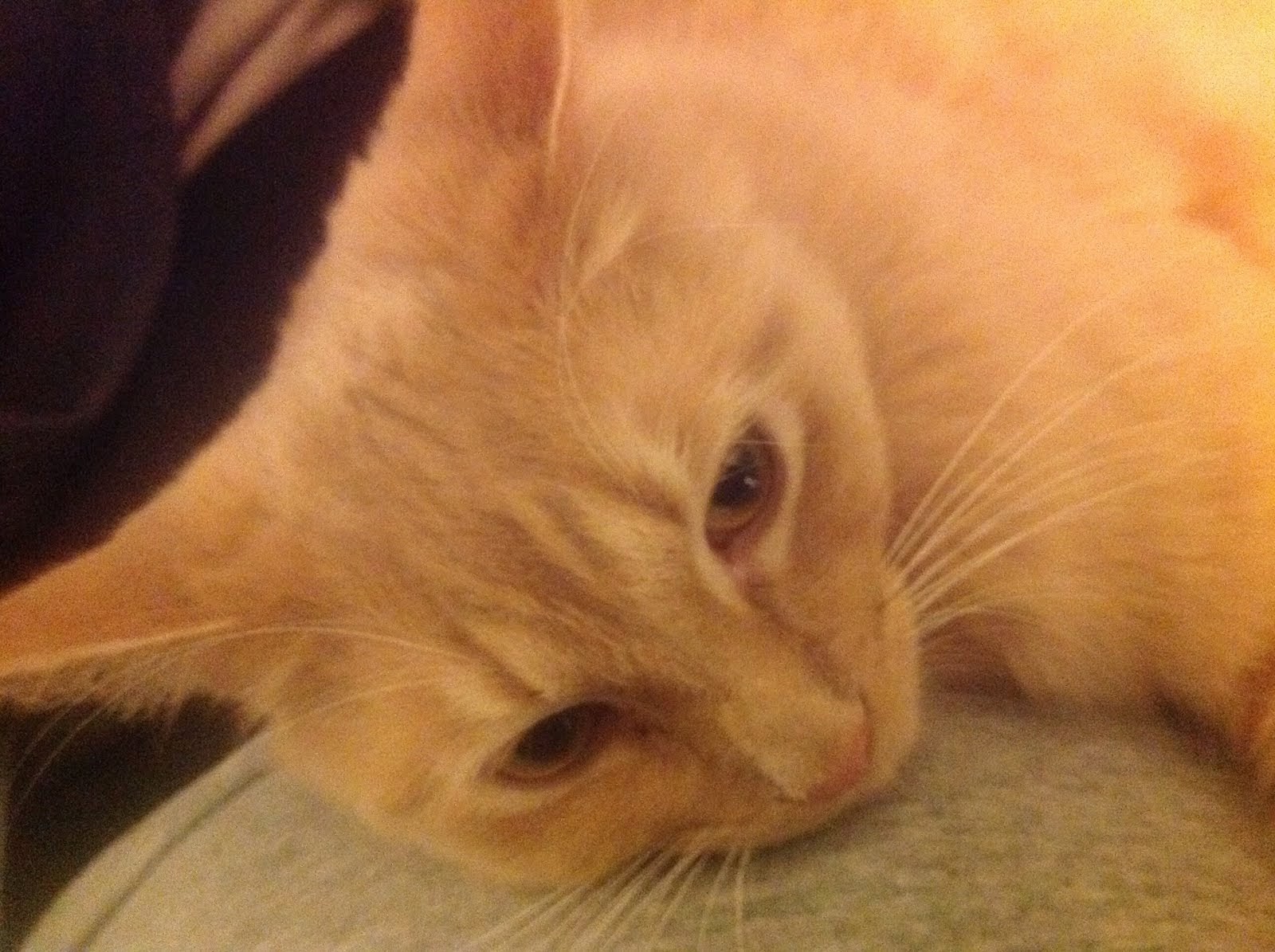 "Do you think he knows there's a baby in there?" Husband asked as Tyler was once again lying on my lap. This photo was taken when I was nine weeks along. Could he sense baby Jate's heartbeat? Cats have a powerful sense of smell and are specially responsive to pheromones. My Vet mentioned that her cats seemed to know that she was pregnant before she did with both her pregnancies. A few years ago, an article was published in the New England Journal of Medicine about a cat who lives in a Nursing Home and would sense when residents were about to die. Dogs can be trained to recognised hypogylcaemic episodes or to detect seizure activity. Is it too much of a reach to think that a cat could detect life?

I like to think that he can. He still sits on my lap, but in a more protective manner. Dare I say even proud. 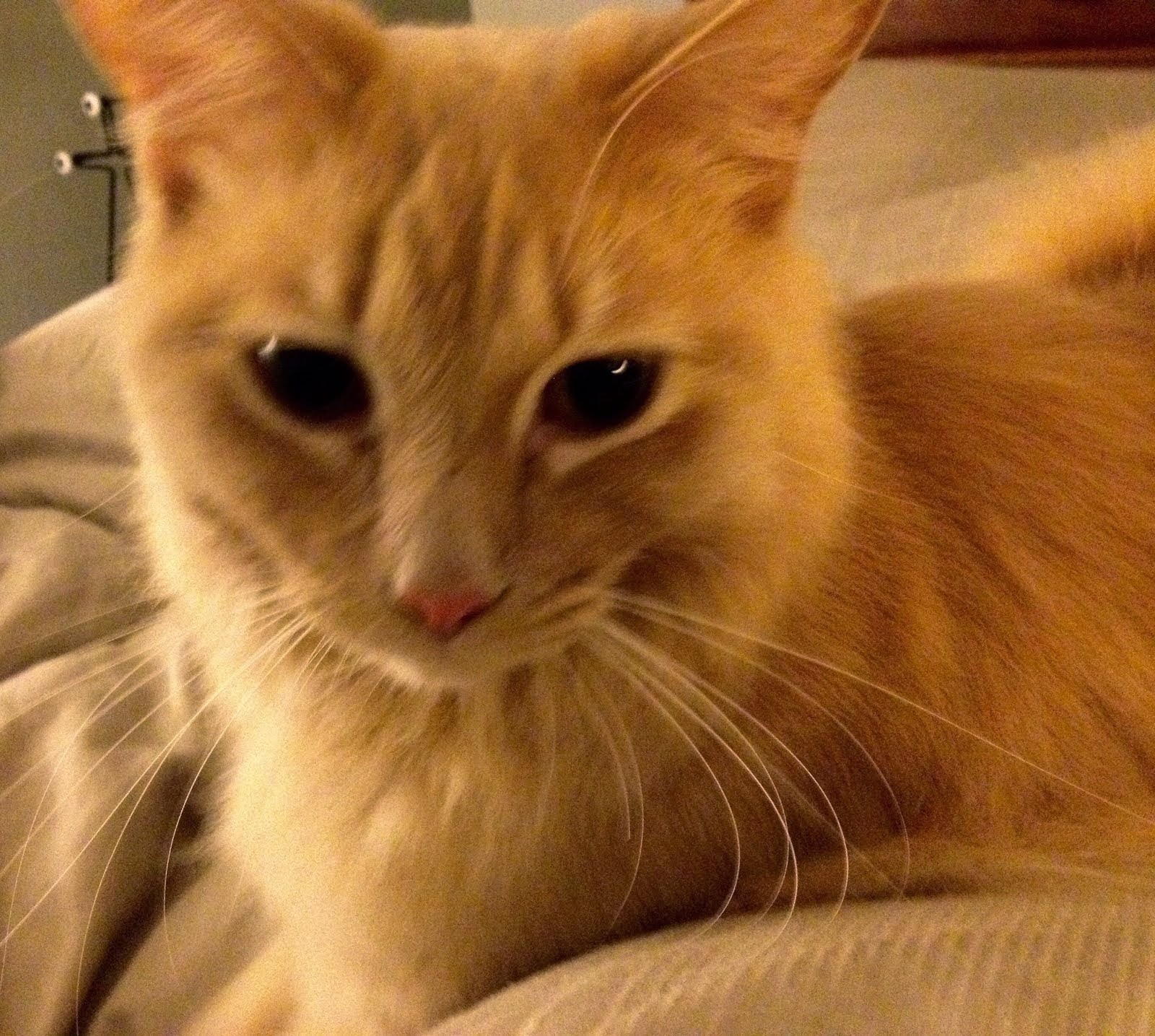