Pregnancy is not an off season

I debated back and forth over whether I would enter our league's championship swim meet, although I knew I would probably sign up just before the deadline, just so it wouldn't be too late if I changed my mind. Although I know I have the pregnancy excuse, I had to acknowledge that I probably wouldn't have been as prepared for this meet, even if I weren't pregnant.  Last year, I found myself needing to take breaks from swimming, fearing that I would lose my enthusiasm and resent my training. However, each comeback was interrupted by something else, and I never really regained momentum. I occupy an unusual spot within my swim team. I'm not as fast as the former high school and collegiate swimmers, but I'm faster than the others who took up swimming later in life. I have some physical features that are conducive to swimming fast, but I know that in order to become faster, I have to perfect my technique, which is much more tedious of a task.

As the weather turned colder, I started swimming in the evening than in the morning. Why wake up at 0530 to jump in an outdoor pool when it's 45 degrees outside, when you can sleep in and swim after work in 60 degree temperatures? The only trouble is that I can't make it to class on Monday nights due to my work schedule and there isn't a class on Wednesday. So I've only been swimming once or twice a week for the past three months. As there are nights when I don't sleep that well, I still can't bring myself to get up in the morning, even as it's become slightly warmer. Yet, admittedly, I had been avoiding the morning practise sessions so that I wouldn't have to confront Lena in the locker room. At the end of last year, Lena announced her pregnancy by describing how they weren't even really trying and she was so grateful as she could never go to the extremes of those infertile people. You know, people like me and you.

I decided I would sign up for the distance events. I'm not a natural distance swimmer, but as not too many people like the distances, it's an easy way to score some points for our team. Mostly, I didn't want to have a permanent record of some really slow times for my regular events in the USMS database. I knew my coach would ask me to swim on a relay team. Relays count for double points, so it doesn't matter how slow you swim, anyone with a pulse gets placed in a relay. Yet, I didn't expect that I'd get selected for four relay events over the three day championship. While I was happy to see there was a high demand for an out-of-shape pregnant swimmer, it was hard to see my name listed for the 'B' relay teams. Last year , not only was I selected for the 'A' (fastest) teams, but two of those teams made it into the USMS National Top Ten times. Again, I had to admit that I probably wasn't 'A' team material even without my pregnancy. I decided it would serve as an excuse for now and I found the motivation to return to training after the little one is born.

Other than the bump, the other challenge to relay swimming while pregnant, is that I couldn't dive. I had to start from the wall, which costs valuable seconds. Once again, our coach will take whatever she can get, plus she factors that at least 1 or 2 teams will DQ. I swam the freestyle leg on our 35+ 200 yard Mixed Medley Repay and I had the fastest split. Okay, freestyle is the fastest of the four strokes, and should be the fastest leg. Yet, while pregnant and from a wall push, I still beat two male swimmers! I feel a  smug sense of pride. The next day, I had to swim on a relay with Lena. My coach thought it was adorable to have  two pregnant women on a relay. I hadn't seen Lena since that day in the locker room. I thought about what I would say to her. I tried to work on some slight jab to let her know I heard her comment about not being one of those infertile people. I couldn't come up with anything. We exchanged pleasantries and a few pregnancy details. We're both keeping the gender a surprise and high-fived for being old school. I was proud to swim with her on our team's first (technically) six person 35+ 200 Freestyle relay. I had the fastest split in a time one second faster that my medley relay swim.

My not-so shining moment was my 1000 yard freestyle swim. A nice long slow distance at the end of the meet felt great, but I finished two and a half minutes slower than last year's time and 40 seconds behind my seeded time. The lead swimmer in my heat received the bell while I still had 100 yards to go, which means she lapped me twice. Nonetheless, I picked up 7 points for our team with my third place finish. 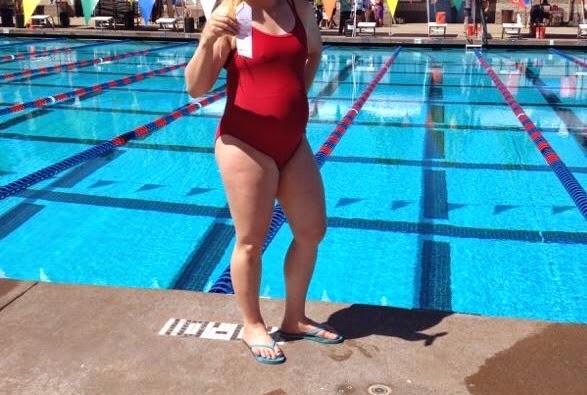 The fact that there were only 3 people entered in the event is completely irrelevant.

I started swimming a few months before my 35th birthday, as I wanted to compete in a triathlon. Training for this event represented my childfree life, as I didn't have any responsibilities or obligations to hold me back. Then I discovered that a Facebook friend was also signed up for the competition, also her first triathlon. Six months after the birth of her baby. On race day, I spotted several children holding handmade signs as they cheered for their mom or dad. As I started running in other races, I took notice of families running together. Mothers and daughters with matching outfits. A young boy with a shirt that read "My mom can run faster than your mom..." At a Halloween themed half marathon, one woman won her age group while pushing two toddlers in a baby jogger and wearing a costume. It was more than inspirational, it was transformational. Everything that I embraced in my childless life, career success, sports, travel... became something that I wanted to share with a new person. The world is too much amazing. There is so much beauty and so many good things in life, that I no longer wanted to contain it for myself.

Our primary hope is that Jate is healthy enough to participate in any sport that he or she chooses (although there will be many suggestions toward hockey, tennis, running, swimming...). Sports have been such an important part of our lives. Tennis helped me gain self confidence. Gymnastics taught me determination and discipline. Husband and I met through hockey. I hope to tell Jate that he or she ran four 10 Ks, a 10 mile race, a half marathon, swam in two swim meets and continued to Cross-Fit all before birth. Maybe that will inspire him or her