As I had missed the general warm up session of a recent swim meet, I also missed out on getting a parking spot. Fortunately, I managed to find street parking rather close. I had a nice view of the entire facility as I walked toward the Aquatic Centre entrance. The first heats of the 400 Individual Medley were getting started. The warm-up lanes were still pretty busy. Masters swimmers who were not competing were going through some drills. A water aerobic class was taking place in the shallow teaching pool. Despite all this activity, the one object that caught my attention was the diving block for lane one of the long course. Almost two years ago, I sat on that diving block as my RE reviewed the fertilization report from my first IVF cycle.

Two days prior, on Halloween, my RE performed my final follicle count. My estrogen level had plateaued and he felt it was time to trigger. I had been keeping count during my monitoring appointments and I was anticipating having nearly 14 or 15. My RE warned me not to focus [get too excited] on this number, as it would only matter how many were mature. The detail that he failed to explain to me, was that my estrogen level would correspond to the projected number of mature eggs. As I peaked at 1500, he figured 6-8 mature eggs. I felt that number was very insufficient. We would maybe get 4-5 to fertilise, and possibly have 1-2 to transfer, which wouldn't make it worth doing pre-implantation genetic screening. I could sense this cycle was going to be a failure. Instead of asking important questions about my prospects for this retrieval, I distracted myself with trivial details; could I swim the day after my retrieval?

As I left his office, Myrtle texted me a photo of little Myrtle in the most adorable lamb costume. I had managed to hold it together while I sat across from my RE, but this picture prompted my breakdown. Tears, sobs, it was a full on ugly cry. Adding insult to injury; Myrtle had included me in a group text. Like hitting 'reply all', the other mothers included in the group texted pictures of their kids in Halloween costumes. I had plans to attend a costume party at a local bar later that night. As I prepared to bring my trigger shot in my purse, I thought about whether or not it was appropriate to be administering my all important trigger shot in the bathroom at a bar? I was filled with so much doubt that I knew it really wouldn't matter. Husband and I went out to dinner, as we wanted to avoid being home and needing to attend to trick-or-treaters. Moments after we walked out of the restaurant, I burst into tears again. More uncontrollable sobs. Husband knew there was no way I could hold it together, and he called our friends to inform them that would would not make it to the party. All this was triggered by the sight of a diving block.

As I unpacked my car and snapped my daughter's infant seat into her stroller, I felt validated and finally fulfilled. All the doubts and fears I felt as I was sitting on that diving block were confirmed. It would take the second transfer from my second stim cycle to finally produce our baby. A year later, on another Halloween, I received the beta results that indicated that Jate was on her way. Here we are, another year later. She wouldn't cooperate for a Halloween photo. 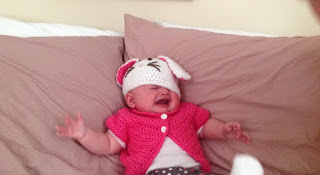