She sits like a viper, and offers a clock without giving a damn....

-Belle and Sebastain 'Take Your Carriage Clock and Shove It'

Except I did give a damn. It was my first Christmas with then-boyfriend-now-Husband, and I wanted to make a good impression on his parents. I spent hours walking up and down and in and out of every store on the High Street before choosing a carriage clock at Deb.enhams. My now in-laws accepted it graciously, despite the fact that they had at least three carriage clocks in their front room alone. It now gives me a sense of satisfaction to know that a carriage clock is considered to be the gift to give when you don't give a damn.

While I was living in England, I could handle my in-laws in small doses. A dinner or Sunday lunch now and then, each encounter would only last a few hours. When Husband and I moved to the States, we would visit them for at least a week. As soon as we would arrive, my Mother-in-Law (MIL) would ask about my work, my parents, my cat and Myrtle. That would be it. We would run out of conversation at that point. Both his parents had retired, my MIL worked in a cafeteria and my FIL was a builder. They didn't travel and don't have any hobbies. As we were planning our wedding, I discovered something that I had long suspected; my in-laws don't have any friends. The only guests they invited were my MIL's cousin and her husband, their neighbour and the lone friend of my FIL, who has since moved to Scotland and they haven't spoken since our wedding, which was almost ten years ago. They are incredible socially awkward. When you try to talk to my MIL, she just comments "that's nice", which pretty much shuts down the conversation, but I think that's her go-to response as she really doesn't have much to add to the discussion. My FIL and I have long accepted that we have nothing to say to each other and have since stopped making any effort. I just can't escape the thought that we merely exist in each others' lives because I happen to be married to their son.

Those visits are so painful as 'spending time with his parents' involves sitting around their living room; not surprising, the layout of the sofas is not conducive to engaging in conversation. We all sit in silence, which is almost as agonising as watching the morning chats shows that are playing on the telly. Husband brings his laptop, so he can stay on top of his work. I started bringing journal articles to read, and I can bang out a lot of CME credits during these visits. When the cabin fever sets in, and I'm about to go stir-crazy, I'll go for a run, begging my feet to carry me one more mile so I can delay going back into the house of awkward silence. There are other reasons I feel so uncomfortable around my in-laws. They wait on Husband hand and foot and his behaviour regresses. He can leave dirty dishes on the dinner table, because they'll clean up after him. Many years ago, long before we were married, he called his mother a "lazy cow" and his father a "dickhead" and tried to explain to me that this is how they speak to each other. (accurate, but that's not the point)  I was horrified that someone I was dating could speak to his parents in such a derogatory way, but more so, it made my question why his parents would tolerate such talk. To this day, if I spoke that way to my parents, even in jest, I would get smacked across the face. Yet, despite the fact that I blame them for most of Husband's faults, I appreciate that he could be so much worse!

Last month we travelled to Connecticut to visit with my parents and Husband's parents, since it was a shorter flight for them and would give them an opportunity to meet Kate. Conversing with my in-laws is even harder now. They both speak so softly that it is hard to hear what they are saying. After the second time of asking them to repeat, you just pretend that you understood and nod, or just say "that's nice." My FIL has profound hearing loss and wears hearing aides, which truly makes me feel badly as Helen Keller described that it is worse to be deaf than blind. "Blindness separates you from things, but deafness separates you from people."  I asked my MIL to recount what Husband said when he called to announce Jate's arrival. "Oh. I can't remember." Thus, that attempt at conversation was shut down. On a Sunday afternoon, I informed my FIL that we found the channel that was broadcasting the Formula One race (his only interest). "Well, that's no good. [my MIL] doesn't like to watch it" was his way of saying 'thank you' as I'm sure he considers that my MIL doesn't like Formula One racing when he watching it every weekend back at home. I asked if he was happy with the success of the English driver. "He's such a wanker. He'll cut in front of another driver and will do anything to win." Um, I thought that was the point of the racing. Okay, I'll just stop trying...Husband called his father out for the real reason why he doesn't like that driver; he's coloured. Yes, my FIL still uses that term.

I had other concerns about my in-laws being around Jate. I didn't want them to change her as I don't think they have the reflexes to stop her from rolling off the makeshift changing table. I didn't want them to take her for a walk in her pram as I feared they wouldn't cross the street in time on the blind corner in front of my parents house. I let them give her bottles, but I had to watch carefully as Jate would nearly wiggle out of my FIL's lap. They did seem to truly enjoy their time with her, and I hope she has a meaningful relationship with them despite my distain. I recall that when I was 10 or 12, I could sense the tension between my paternal grandmother and my mother. I vividly remember when I heard my maternal grandfather made a racist comment. I was filled with a profound sense of disappointment. I also recall my mother instructing my grandfather not to use such words in front of me, or she threatened that we would no longer visit them. I wonder if I should have such a conversation with my FIL.

I also fear/acknowledge that Jate will regard my parents as the "fun grandparents" compared to my in-laws. It's inevitable, not just due to their personalities; my parents are younger and in very good health for their age. They have lots of friends, they travel, my mother knits and runs a dominos club. They can't wait to take Jate to Disneyland. I worry that they may try to spoil her, and I may have to have that awkward conversation with them. My friend Amy instructed her mother not to buy her daughter too many presents for Christmas last year, but her mother went overboard. As she threatened to do, Amy opened all the gifts, selected a few for her daughter and gave the rest to Toys for Tots. Yet, at the same time, it's spoiling (just a bit) part of the grandparent experience?

We had some other incidents with my parents during the trip. My dad locked Jate inside the car. It's a story we can laugh about now. My mother and I went shopping and my father stayed in the car with Jate, who was sleeping in her car seat. When we finished, we found my dad frantically pacing around the car. Jate started to stir, and my dad sprang into action by opening the driver's door and he accidentally hit the auto lock button. Jate feel back asleep by the time my dad discovered he was locked out. He called 911 and within 20 minutes some very nice [looking] firemen showed up and used their big hook to grab the keys off the passenger seat and retrieve them through the partially cracked open window. Jate slept through the whole ordeal. We thanked the firemen and my mom asked if they wanted to see the baby they rescued. It was quite precious to see a group of buff and burly firemen coo and aww over a baby. Husband wanted to put my dad 'on probation', but I thought that was over reacting. I didn't really freak out over it. The end result wasn't any different if my mother and I had spent twenty more minutes in the store. Plus, I knew my dad felt like shit and if I over reacted, he'd only feel worse.

As it turns out, my mother is far more dangerous with a car. We travelled to Pennsylvania to visit my mother's sister and naturally Jate woke up just as we passed the last rest stop in New Jersey. Jate was screaming her head off as we were counting the miles until the next stop. "Can you change her in her car seat? my mother asked. Um, no. Putting aside the fact that I would have to partially detach her from the protection afforded by her 5-point harness, I wouldn't be at an angle where I could effectively change and clean her. Jate continued to scream even louder as then next stop was still 15 miles away. "Can you hold her?" my mother asked. Um, No. Fuck NO! I couldn't believe my mother was suggesting that I would allow my daughter to be an unrestrained passenger in a moving vechile. Then again, I don't think she's aware of the fact that half she shit she did with me back in the 70s would get written up by CPS today. 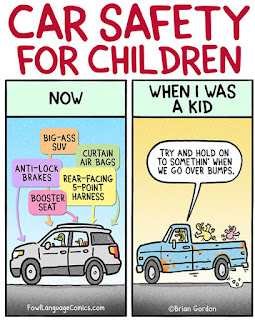 This rings oh, so true.

Yet the ultimate moment that got under my skin also came courtesy of my mother. We took a day trip up to Boston to watch Husband umpire and not surprisingly, Jate slept the entire time she was in the car. It also happened to coincide with her usual nap time and she slept just over two and a half hours. When we arrived, my mother commented. "Oh, she's had a long nap. You're in for a night of hell." Firstly, that's flawed logic. Sleep begets sleep. A woman at my gym who is a mother of twins gave us the advice, "if you want your baby to sleep at night; make sure she sleeps during the day." I'm much more concerned about whether or not she'll sleep at night if she doesn't nap well during the day. Secondly, who the hell says that to a new mother? Thirdly, who the hell says that in such a sing-song tone that is practically punctuated with a smiley face emoticon. I was so hoping that if there were ever a night where Jate slept soundly, it would be that night, so I would have the pleasure of proving my mother wrong. Unfortunately, Jate must be in cahoots with my mother as she woke up at 1 AM and didn't go back to sleep until 3:30. The comment pissed me off the first time I heard it and every time Jate cried, it pissed me off all over again. Weeks later, I still hear my mother's words haunting me when Jate wakes up in the middle of the night. It's become my Raven.