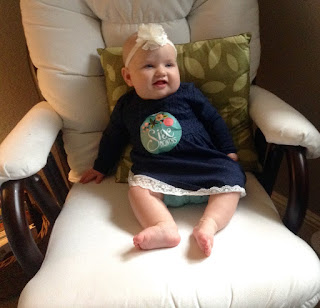 Well, it took 6 months, but it finally happened. Our house looks like we have a baby. One of the things I loved about our one story house from the first moment I walked through the door, is that the kitchen, dining room and living room are on the left side of the house and all the bedrooms are on the right side. The only baby related items outside of our bedroom and her nursery were the Rock and Play and her playmat, both could be folded and stored behind our sofa. Now we have a high chair and activity centre in our kitchen, as well as a bottle warmer and sterilizer, and the Baby Bullet on our counter. I used to have a herb garden in the greenhouse behind the kitchen sink, now I have a 'garden' of plastic flowers that dry bottle accessories. We got rid of our glass coffee table and there is now a foam tile floor mat in our living room. I bought a large basket to gather her toys at the end of the day. Sigh. She has taken over our house. 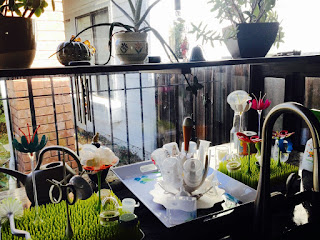 These flowers are still rather high maintenance. 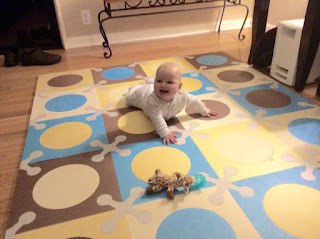 So, there has been a new development with my work schedule. I had been discussing the possibility of working a long 12 hour day and reducing my work week to 36 hours, so I would only work four days. Well, somewhat not surprising, no other providers or staff members were interested in working a 12 hour day, but I was able to configure my week to work two 10 hour days. I just had to get approval from the Bean Counter. "Yeah. Good luck with that," were the encouraging words from our office manager. Yet, to my absolute dismay, I received no resistance. She replied to my email by confirming that I would still receive all my benefits, I would just earn less money. I didn't mention my intention to take a day off, as I figured she would decide that would be too nice of a perk and would find someway to block it.

I'm very happy with the way I was able to set up my schedule. Monday is my late night, as my hours are 8 AM - 6:30 PM. I'll still drop Jate off at Day Care, and I should get home just in time to put her to bed. I selected Monday for one of my late days as there are four Federal holidays that are always on a Monday and the Christmas and New Year's Day holidays will be observed on a Monday for the next two years. (I did a lot of reaseach into this) Tuesday will be my day off, so I'll have a nice long weekend during those Monday holidays. Friday is going to be my early day, where I start at 7 AM. It's going to suck leaving the house so early, but I'm just going to think about what I did on my day off and feel excited for the weekend.

As it feels too good to be true, I'm not going to really believe it until it plays out for a few weeks. We didn't make arrangements to decrease Jate's Day Care until February. At times I feel that we've been in a really good grove with our current work and Day Care situation, so why disrupt it? Then I remind myself that I can always return to the status quo if this new schedule doesn't work out, and I'll regret it if I don't take advantage of this opportunity. The difference in my take home pay for the year, after adjusting for taxes and off-setting the Day Care savings, is $5,500. Spending more time with Jate: Priceless.

Eating:
We finally started solids! On the advice of our Pediatrician, we first introduced rice cereal. (I've never understood the concept of rice cereal, but I suppose there is Rice Chex...) I followed the instructions on the back of the package and mixed 1 tbsp of cereal with 4 tbsp of breastmilk. It was pretty thin and runny, so it was more of a case of spoon feeding her breastmilk than experiencing solid textures. We recorded the event, which featured Husband accusing me of reversing the ratio of ingredients, then reading the box to discover that I was right, and me, doing my 'I told you so!' dance. While it was easy getting food into her, it was not so easy for her digestion, as she cried for almost two hours that night. We discovered that we made a rookie error by feeding her at night. Our pediatrician advised us to introduce anything new in the morning or early afternoon, and to give some simethicone ahead of the feeding. We followed those instructions when offered her first taste of vegetables (butternut squash) and it seemed to be better received. We've learned that it takes her GI system a little while to adjust to something new, so we've decided to wait one week before introducing anything new, and we'll do it on the weekend. 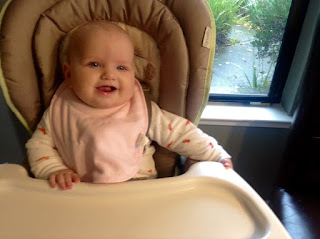 "Ready to get more food on my face and hands than in my mouth!"

Teeth:
Still none. Our Pedi doesn't think it will happen in the next month

Sleep:
Our biggest accomplishment in the sleep department is that we transitioned her to her crib, but we took a few steps back during the process. A few things contributed to her adjusting to the crib rather well. We had be having her take her naps in the crib for almost two months, and we probably kept her in the bassinet a bit too long, to the point of it being too small for her. We had been working on teaching sleep independence, where we would put her down before she fell asleep, in order to teach her to fall asleep on her own. We had also been doing some sleep training if she woke up before midnight, but we began to notice a pattern that she seemed to be waking each night around 11 PM, so we started feeding her as if it were a dream feed, as we found that if she didn't wake up at 11 PM, she tends to wake at 3 AM. A feed at 11 PM is much preferred to one at 3 AM. These feeds are relatively easy, and she usually falls back to sleep in about 15-20 minutes. She seems to suck vigorously, which makes me think she's truly very hungry, but as she goes back to sleep so easily, I also question of we should be doing more sleep training. I don't have any answers, but I did learn some valuable lessons

We decided that we would do the crib transition while my parents were visiting, so that if we had a really bad night, we'd have extra help on hand during the day. However, sleep training with the grandparents doesn't work. If the sound of your baby's cries doesn't break your heart, your mother shooting daggers with her eyes will. My mother really didn't get the concept and kept offering, 'do you want me to rock her?' which made me feel like we were just being lazy parents. So, I rocked her to a sound sleep before putting her to bed each night, and we nursed each and every time she woke up. We're back to square one, just in a new venue. I'm happy that she's settled in her own room, but it was hard to walk into our room and see the empty basinett. We decided we would keep it up for a few days just in case the transition totally backfired, but like Amaris, I can't bring myself to take it down. Mostly, because it is useful storage for clothes that are clean, but I'm too lazy to hang back in the closet. After yelling at Tyler to get out of the basinett, I'm now encouraging him to use it. 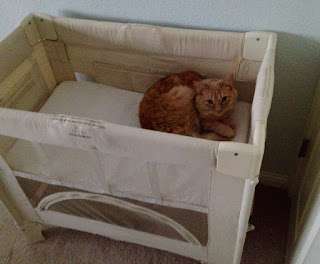 Likes:
Before we started feeding her, we put her in her high chair and would let her play with a few toys. She discovered the fun game of 'throw stuff on the floor and watch Mummy and Daddy pick it up'. She wins every time. She received a few new toys that seem to capture her attention for a little while. Our favourite toy is 'Follow Me Fiona", which is a little dog that is supposed to encourage babies to crawl. She started to make this high pitched squealing sound, so Husband and I would blow raspberries to divert her attention. Now she won't stop blowing raspberries.

Dislikes:
Not a happy camper when it's time to get into her car seat. She's also not a fan of her late afternoon nap. It's always a struggle to get her to go down and it's her shortest nap.

Diapers:
Still the same; size 3 Pamp.ers at night and regular sized cloth diapers during the day. However, now that she can roll, diaper changes have become really challenging.

Clothes:
We're now in 6-9 month sized clothes, and I just stocked up on some 9 month sized layette sets from Cart.ers. Despite the fact that no teeth are imminent, she drools profusely, prompting frequent outfit changes. I usually have to change her clothes after eating. Our Day Care requests to have two extra sets of clothes in the event of a blowout. We have six set aside for Jate, and she's gone through them all in the course of a week. Husband jokes that she goes through more outfits than Madonna in concert. We do a lot of laundry.

Milestones:
She's really taken off with rolling. If we put her on the foam tile mat, she'll roll her way from one side to the other. There is no leaving her unattended even for a minute. She's not really figured out crawling yet. She can get herself into position,  but she'll push backwards, rather than moving forward. Her hand coordination is very impressive, and our pediatrician commented that developmentally, she seems to be at a nine month level. He did warn that babies who developmentally advanced, sometimes incur language delays. I don't want to make the mistakes of my cousin, who buried her head in the sand and ignored her son's obvious language delays. So in an effort to be proactive, we enrolled her in a baby sign language class. Despite the fact that he pissed and moaned on the drive, Husband actually really enjoyed the class and has been doing quite a bit of practice with her. I've been brushing up on my basic Spanish so I can read her classics such as Vi Perro Vi!, Buenas Noches Luna and Huevos Verdes con Jamon.

Health Issues:
Fortunately, she recover from her cold rather quickly and has been well since then!

Looking Forward To:
If it goes go to fruition, I'll be looking forward to having a day off during the week, but to be honest, I'm not sure what we'll do! I feel like we need to be more productive than my bottle washing Gilmore Girls watching days from my maternity leave. I've been looking into a Mom and Baby yoga class at our local sports store, and our library has a lot of free events. I will admit that I'm hoping to sync her nap back to noontime, so that I can swim again. Actually, as we still have Jate in Day Care full time in January, I'll have two baby free days to myself. One of the items on my to-do list is to have a good cull of my closet as well as removing old health and beauty items from our bathroom cabinets as well as sorting for expired items in our pantry and fridge. Sigh. Isn't sad that I look forward to these tasks?