As breastfeeding was going so well, I thought I had won the debate on baby feeding. Nope. I had just passed Phase One. When Kate was almost three months old, I went for lunch with some other mothers in the New Parents Support Group. As their babies were a few months older, they had begun introducing solids through Baby Led Weaning. "What's Baby Led Weaning?" I asked in earnest. The two women exchanged looks. I'm sure it was acknowledging their surprise that I hadn't heard about Baby Lead Weaning, but also realising it was an opportunity to teach me. Almost talking over each other, they quickly ran through the philosophy and principles of this approach, and then tried to convince me that purees are passé and BLW is the BFD. "It's so great! Baby eats what you eat!" one woman kept repeating. That's where she lost me. Yeah...you see about that... I said to myself in my Bill Lumburgh voice. We eat like crap!

When we were getting ready to start Kate on solids, I realised it represented quite an opportunity. I could make sure the foods she eats in her first year, will be the healthiest choices of her entire life. I went to Whole Foods to purchase their pre-cut butternut squash. Husband tried to cook with a bag of organic peas, but I stopped him in time to point out that those were for Kate, we would be eating from the bag of basic Safe.way brand peas. I relished having total control over what she would be eating. I know I will eventually have to relinquish this control as she will become exposed to other foods outside of our home. She'll discover that candy is involved with almost every major holiday and she'll receive the obligatory cupcake with each classmate's birthday. Even just this past week, the instructor at her Baby Yoga class offered flavoured teething biscuits. "They're organic!" she assured her crunchy Bay Area audience. A mother next to me read the wrapper, "it contains organic sugar" she informed me. The purist in me wanted to refuse it, but I didn't want her to watch all the other babies snacking on their waffers, not that I know whether or not she'd get upset about it. "There are worse things..." I commented to the other mother as I decided to let Kate have the treat.

The thing is that I do want her to enjoy foods. I want her to discover that chocolate and peanut butter make an awesome combination. I want her to know that everything is better with bacon. I just want her to be at an age where she can make good choices. The trouble is that I'm nearly 40 years old and I still haven't learned those lessons. Although we have improved over time. When we moved into our house 6 years ago, we were spending our evenings working on remodeling and we ate take-out meals almost every night. I gained nearly 10 pounds during that time, it was a struggle to lose that weight. As I've mentioned previously, Husband is not very [at all] helpful with meal planning. Sometimes, I would ask him just to defrost a protein in the morning, figuring that we could create some kind of a meal when I came home from work, only to discover that he failed this task. It always amazed me they way he could be so oblivious about dinner. I suppose between his mother and myself, the magical dinner fairy has produced a plate in front of him. I pointed out that it was fine for him to ignore dinner with me, after all, I'm an adult who can fend for herself; but if we were to have a child, he would be legally responsible for feeding him or her!

Throughout the course of our (almost) 10 year marriage, we've gone through the 'what's for dinner' debate. I finally had to accept that I will never get assistance with meal planning, and if I leave him to do the shopping, he'll come home with many unhealthy options. I am fortunate in that he is a good and willing cook, so I'll continue to handle the other two tasks. Previously, we would do well for a few weeks, then encounter a week with many FUFFYs, (when one of use will not be home for dinner, it's Fuck yoU, Fend For Yourself) or we'll just get busy and planning will go out the window and we'll be left scrambling for dinner ideas each night. Now that Kate is here, I can't drop the ball on this. As she will eventually be eating what we are eating, it's my responsibility to make sure we have a plan for dinner each night, and I'm also taking ownership to make sure it's a healthy and nutritious meal, and not processed crap.

I often quote Eleanor Roosevelt, "you cannot ask that of others, that which you are not willing to do yourself". If I want Kate to eat healthful foods and to develop good habits, then I have to model good behaviour. During the month of June, I'm going to do a Whole 30 Challenge. No sugar. No grains. No dairy. No legumes. No alcohol. It's my version of Cry It Out. I know I won't always be able to maintain clean eating and I know I won't always be able to control Kate's food, but I'm going to do the best that I can, for as long as I can.

The other behaviour that we have to modify in order to set a good example for Kate is with watching TV. Our pediatrician is very adamant about not exposing her to any screen time before the age of 2 years. As we were reading about the purpose of white noise to help infants' sleep, I recognised we seem to use TV for the same purpose. We'll turn on the television to syndicated episodes of The Big Bang Theory or Modern Family really just to have something background sound. So we've moved to using Pandora in the kitchen while we're making dinner or feeding Kate. Husband was also motivated to reduce our monthly bills, so he dropped our cable provider and switched us to a Roku. There are fewer channel options, but still gives us access to some basic cable channels and we spend a little extra for HBO. We only watch TV in our bedroom after putting Kate down for the night, but we'll rarely stay awake long enough for an hour long programme.

I question how long we'll maintain this strategy. My mother described that when I was a toddler, her one hour of sanity per day occurred while I was watching Sesame Street. I actually feel that The Street really helped shaped my upbringing. I learned to count, was introduced to Spanish words and other aspect of cultural diversity, as well as other valuable life lessons, such as Mr Hooper's death and Gordon and Susan adopting a baby named Miles. Furthermore, I cannot deny that television media is an important aspect of our social experience. The Nurse who led our New Parents Group described that she didn't let her children watch TV and her son felt left out while playing with his friends as he didn't know what The Power Rangers were. I made some friends in my college dorm while gathering in the common room to watch Friends each week. During most of the 90s, you could break the ice or evade an awkward pause in a conversation with a Seinfeld reference. I do want her to experience the positive benefits of TV.

Yet how to strike a balance? While I was growing up my TV time was limited and I could not watch television if it was a nice sunny day outside. My mother would literally shut off the TV and throw me out the door to go play in the back yard. If it were raining outside, I always knew that it meant I could watch cartoons, but my mother would give me something else to do while the TV was on in the background. I had to play with Legos, color or if she happened to be sewing, I would make clothes for my stuffed animals and dolls using her material scraps. My parents had a friend who used an interesting strategy with his boys. They had to earn an hour of watching TV or playing video games by reading for an hour. His hope was that they would become so engaged in the books that they would prefer reading to TV, or at least if would reduce the number of hours of TV time. It worked for the younger son, as he became a voracious reader. It was a struggle for the older son, as he had learning disabilities (probably dyslexia). I think I'll adopt a similar strategy, but may include other non-TV activities such as playing with Legos or art projects to start at an early age.

The final behaviour we need to modify is our use of iphones and the ipad (although as I am tying, Kate is sitting beside me eating Cheerios in her high chair). A few months ago, Husband was googling early signs of autism (you know, as you do...) and found a video from the Kenndey Kreiger Institute. In one particular clip a boy on the ASD spectrum was playing with an old mobile flip phone. The voice over described "the child shows an intense interest in his phone and does not share his enjoyment of the phone with others." Um, I don't know if that is unique to autism, as it seems to describe just about any adult with a smart phone, (including myself). I realise that the phone was just the toy used for the demonstration as this boy did exhibit other ASD features, yet it did give me pause to think about the impact of smart phone use.

I saw (on Facebook) a great Meme that captures the dilemma of this aspect of modern technology. "Cell phones keep you close to people far away, but it takes you away from the ones right next to you". This was also brilliantly captured by photographer Eric Pickersgill, in is Removed series. It thinks there is something poignant that many cafes are actually promoting 'No wi-fi service here. You'll have to talk to each other.' Especially when Husband and I are together, I'm trying to avoid using the phone in front of her, so she'll see that people do actually take to each other. Sometimes about things other than what they see on their phones. Yet perhaps the biggest execption with the iphone is when we enage in Facetime with her grandparents. BTW, does that count as screen time? I know how much it means to my parents and my in-laws to be able to see a live shot, so we'll continue our weekly calls and just hope it's not causing any lasting damage. 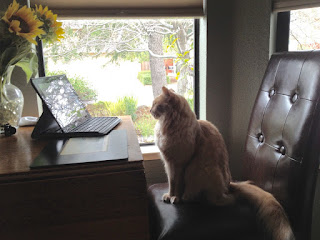 I need a better editor.