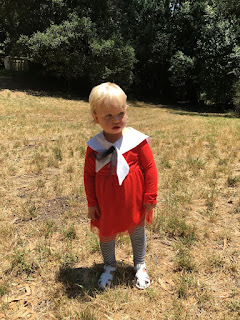 Kate's 'I just woke up face' comes across as
'Not Impressed.'

Let's be honest. While Kate is obviously the star of the show at her birthday party; I play a key supporting role. It's kind of also about me. Am I organized? Am I creative? Do I give out good gift bags? Are the kids having fun? Are the adults enjoying themselves? Is this year's party as good as or better than a previous year's party? Well, last year Kate's first birthday party was marked by two cupcake fails and half of our guests were sick with a horrible GI virus, so the bar was set pretty low for this year's event.

My planning began back in January. It started when I picked up an Oliva book from our favourite conseignment shop. I loved the simple, yet dramatic illustrations and whitty dialogue and I quickly became obsessed with Olivia. As I started collecting every book in the Olivia series, it dawned on me that an Olivia themed party could extend my tradition of basing her parties off of popular children's books. Last year I decided to do a The Very Hungry Caterpillar themed party, I thought I was the first person to think of this idea, until a quick Pintrest search confirmed that pretty much everyone in the world does a TVHC party. As I easily found Olivia balloons, party plates and cups that read "Best Party Ever!" I also wasn't going to be breaking any new ground with an Olivia themed party, yet I thought I had some creative and likely unique ideas on how I would put it together.

*Spoiler Alert if you have not read Olivia*

I wanted to copy some of the activities Olivia performs in her book. As we have a long hallway, I could tape some paper on to our walls for the kids to paint on the wall. I purchased a sandtable for making sandcastles. Finally, as Oliva was very good at wearing people out and could even wear herself out; we'd get a bouncy house so the kids could wear themselves out. I had it all planned out how I would set things up around our house. The only problem, as long time readers will recall, is that our backyard is a shithole. I started my annual quest to make the garden look slightly less like a shithole, and in doing so I pricked my thumb on some wild roses. The next morning I woke up with a painful, red, swollen thumb and ascending cellulitis. The ER doctor informed me that wild roses often carry a very potent bacteria. Asthetics aside, the other challenge with out backyard is that we didn't have the 15 x 15 foot space required for most rental bouncy houses, so I borrowed one that my cousin had purchased. It fit in our garden, but barely. Kids would have been literally bouncing off our house. It was a bit of a painful moment of defeat, but Husband convinced me that our house just wasn't going to work for the party I was planning. I was reluctant to agree, but I knew I didn't want my party to be remembered as the one where kids got hurt.

As we had just recently been to a friend's party for her five year old, Husband reminded me that we're fortunate to live in an area with access to multiple reginal parks. However, while there are almost fifty picnic sites availble to reserve; there are only three that allow both a bouncy house and alcohol. Two essential items. So, we ended up at the exact same site that our friends used when they hosted their party. A bit of deja-vu for some of our guests. Since we weren't constrained by the size of our house anymore, we invited some more guests than we had the previous year, including Isabelle and Bob, three Day Care classmates, one of Husband's colleages and her two kids and one of my work colleagues who had invited me and Kate to her son's party.

Long time readers may also recall my attempt to make my own The Very Hungry Caterpillar themed cupcakes last year. I have to admit my intention was less about saving money and more about proving how crafty I can be; but I spent the same amount of money on supplies to try to make my own cupcakes that I ended up paying for professional made cupcakes. This year I vowed not to waste my time and money. At least not in the kitchen... I tried to grow grass in our back garden... I would show before and after photos, but I think this is a situation where the 'after' pics look worse than the 'before'. I purchased 10 bags of dirt, a few bags of grass seed and a hand held seed spreader. I watered it every night, but nothing grew. So, I'm not a baker, nor a gardner, but I am a decent seamstress. I bought the red dress and black stripe leggings from Nordstrom's clearance rack, but I made the white collar for her 'Olivia' dress. It only took two attempts and three trips to Jo.Ann Fabrics, but I think I pulled it off. 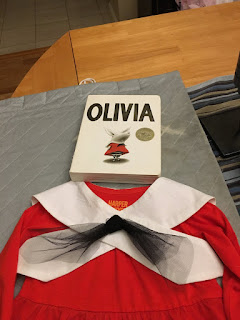 Is it really cheeky to re-use as a Halloween
coustume, if it still fits? 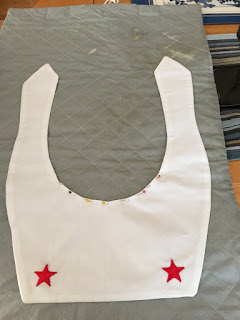 The collar in progress,
Yes, the stars are supposed to be black.
Jane of last year would have obsessed over it
and gone to great lengths to find black stars.
This year, I'm letting things go... 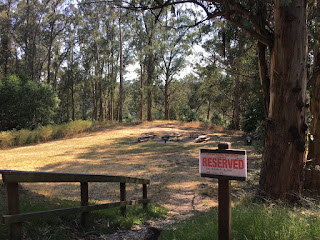 Husband was dissapointed he didn't get to go the the gym
Party WOD
2 Rounds
Lug coolers, crates, tents and tables 200 meters
For Time 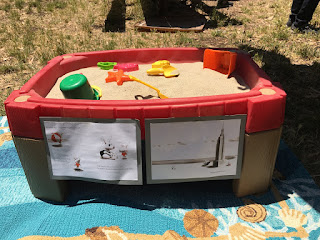 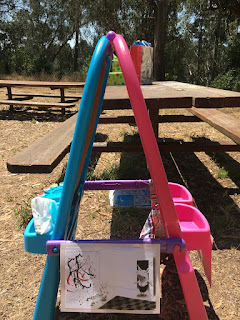 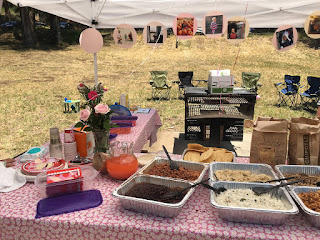 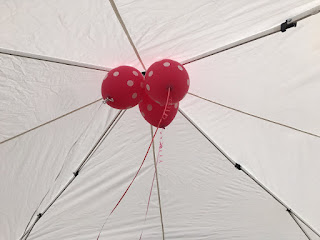 I left Husband in charge of decorating.
He forgot about these ballons and just left them in the tent.
It was a lazy accident, but I though it worked. 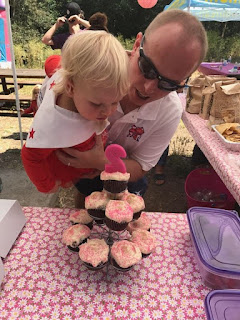 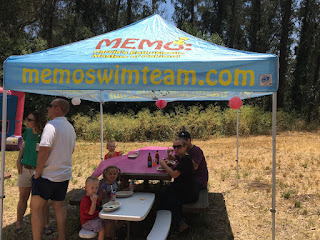 Yes, I borrowed the tent from my swim team...

At the time that I am finishing this post (almost one month later) I have not heard any reports of anyone getting sick and no one was hurt during the party! Although I don't think anyone really understood the Olivia theme to my activities, the kids all enjoyed them. They bounced, painted some pictures and got sand in their socks and shoes (sorry, Moms). I also had a small bubble machine and a bunch of bubble wands on hand. My cousin's youngest son appointed himself in charge of the bubble station and appropriately re-filled the machine and trays with bubble juice. I also had a few Hula-hoops that Kate picked up during our many trips to Jo.Ann Fabrics (they were keeping her occupied and only 99 cents..) that I brought a long, and surprisingly, they were a huge hit. I had done a lot of prep work in the weeks leading up to the party, so it only took Husband and I about 40 minutes to pack and load the cars the night before. I had vowed that I wasn't going to stay up until midnight preparing for the party and I didn't. I was up until almost midnight doing meal prep for the week as I knew I wouldn't have time for it on Sunday (the day of the party). We were exhausted when it was all said and done, but it was an enjoyable day. My favourite moments include Kate wanting me to go into the bouncy house with her (although I had to explain that I couldn't bounce as we usually do, as I was wearing a dress and didn't want to flash our guests) and seeing Kate run across the field to greet her best friend from Day Care. She seemed to enjoy the day and I don't know if I'm imagining it, but seemed to make her way around to interact with everyone who attended. She was the star of the show. I was happy to do my part in the supporting role.
Posted by jAllen at 20:38