Toward the end of last year, as Kate was into all things Peppa.Pig, I began to contemplate a Peppa themed birthday party. I wasn’t exactly sure how I would put it together. Maybe let each kid represent a character? Hold a puzzle challenge with all our Peppa puzzles? I really didn’t have any great ideas, but I found Peppa birthday balloons along with paper cups and plates,, so it had to be a legit theme -right? However, I had done an Olivia party for her second birthday (which some people thought was Peppa…) could I really feature a pig two years in a row?

Then Kate discovered Dora the Explorer and she was so over Peppa. Initially, I found Dora really annoying. The show is so formulated between the map and the backpack. I mean, does she really need a map to find her own house? There is no way all that stuff can fit into that backpack and be light enough for her to carry it. I started getting into the show a little bit when I learned about Swiper. I think Swiper appeals to me because his big brushy tail reminds me of Tyler, but I actually started rooting for him to steal her stuff. Every time I hear him saw “Aw man!” I want to tell him, next time Swiper, you’ll get her next time…

Then I had to confess that Dora was having a good influence on Kate. She started speaking in Spanish and she could solve a lot of the questions posed on the show including some math problems. Then one day Kate and I went shopping, I had a lot of stuff and I decided to accept help out to my car. I let Kate into the backseat and worked with the clerk to unload the groceries into the boot. When I came to the driver’s door, Kate was sitting in her car seat, so I presumed she was buckled in. . As I started to back out, she shouted “Mommy, why didn’t you buckle me?” As I pulled back in to my parking space, ripped the handbrake and climbed over my seat, Kate was finishing buckling herself into her car seat and then looked up at me and said “Seatbelts! So we can be safe!” Okay. Thank you Dora. That sealed the deal on the decision to have a Dora themed party. Oh and I’ll stop cheering for Swiper to steal your shit.

I discovered a park very close to our house through one of her school functions. It features a great playground, which would be easy entertainment for the kids. The only trouble is that the picnic area available to reserve, is on the other side of the park, so I made a sign with “Map” to help show people the way. I searched through Google images and found one with a picture of a park (which is from an episode where there is a birthday party in the park for Swiper), but annoyingly, the actual park was on the opposite side to the picture on the map. 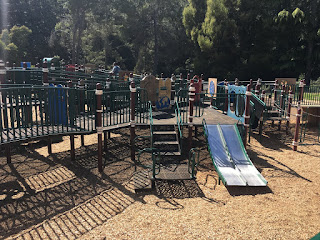 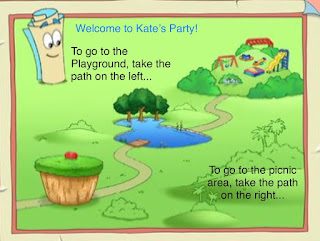 I knew I wanted to do “Backpack” goodie bags, so I found some cheap purple draw string bags on Amazon and the googled ‘what is inside Dora’s backpack’. Don’t try doing that. Apparently, there is a sex act called the Backpack. I didn’t read too closely, but it ends with someone saying “Yum-yum, delicioso!” After that, I just started paying more attention to when Backpack made her entrance while Kate was watching Dora. The gift bags has a (jump) rope, a small flashlight, a multicolor pen, a snack, bottle of water,  a squeeze ball globe (which is as close as I could get to a map) and a passport and stickers. I brought a Polaroid camera and took a picture of each child to put in their passport. I don’t think many of the boys understood the whole Backpack theme, but seemed to think the stuff was cool. 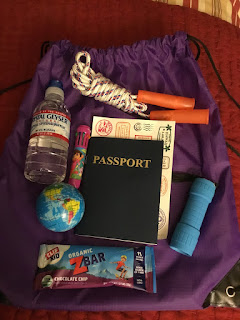 “Backpack, backpack. Whatever you might need I have inside for you...”
Do not google ‘what is in Dora’s Backpack.’

For lunch we ordered from Chipotle, as we did last year, because we needed to do the Mexican thing to be consistent with our theme. Chip.olte definitely is more expensive than other catering options, and I was considering finding somewhere else to provide the meat, but thought I could cook my own beans and rice, get one bag of shredded cheese…then reality hit me. It was worth the cost not only to have it all prepared and but delivered too. I under ordered a bit, as we had so much left over last year. My formula was to count the kids as half and subtract 5 from the total. It was pretty accurate as I only had 3 or 4 meals as leftovers. However, I fell into one trap. I decided not to buy any Dora themed plates or cups, as I still have paper ware from her first birthday party (which I used at this party and if we have a Peppa themed party next year, maybe I can get rid of the Olivia cups and plates from her second party…) Chip.olte catering provides plates, napkins and utensils, but I didn’t take into account that I had undercounted, so we ran out of plates. Whoops! I had guests eating off of the plastic lids to the bowls or having a burrito or taco. My tip from last year; I brought plastic containers for the left overs and baggies for the unclaimed cut up veggies. Bam! Clean up and meal prep done in one action! 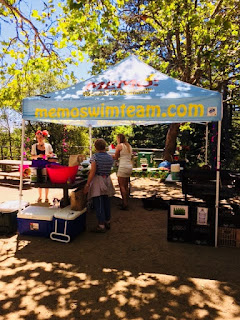 We’ve been to a few birthday parties this year and I’ve watched the parents present beautiful professional cupcakes, only to have the kids lick off the frosting and toss the cake. I was seriously considering just serving tubs of frosting.. but I came up with another idea. I got nice cupcakes for the adults and went with crappy Safe.way cupcakes for the kids. Actually the bonus to the Safe.way cakes is that they do a lot of Nickeledon themes, so when I saw they could do a Dora number cake, I was sold. I placed my order with our local store and the woman informed me that they didn’t have any of the plastic Dora cake toppers. Did I want to do a different cake -Shimer and Shine maybe? I had my first ‘this woman doesn’t have kids’ moment, as she obviously didn’t grasp. THIS IS A DORA THEME. WE NEED A DORA CAKE!!! Not to worry, Amaz.on came through with some Dora related candles.  Personally, I was a little disappointed with the cake as I thought it would be more Dora-esque, rather it was just a Dora looking backdrop, but the kids liked requesting the color of their cupcakes “I want yellow!” “I want green” I will forever love the convenience of cupcakes for a kids’ party. Cupcakes for the WIN! 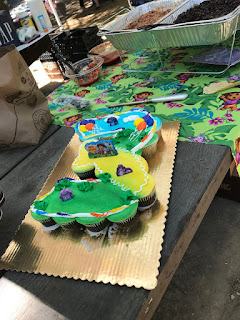 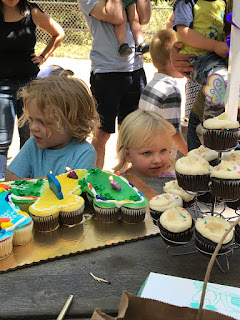 My friend Amy was in London for a wedding and missed the party, but her parter Sheldon (who I imagine wanted to maximize his time out of the house while he was solo parenting their two kids) offered to help set up. I noticed that he brought a small tent out from his car and was setting it up. I didn’t think we needed the tent, but I was too busy with other details to say anything. Good thing I didn’t -the tent was a huge hit! All the kids were running around in and out of it. It was a cave, then a goal for the soccer ball. Sheldon later told me that his kids insisted that he assemble it. Gotta listen to the kids, as they know what makes a party. While we were shopping, Kate requested to have some watermelon. The plastic bowl of pre-cut watermelon was gone, while I was bagging up all the cut up veggies I had prepared and assembled to go along with another picture of map that detailed the three different dips I made and included little Dora characters on a stick to list the ingredients… because I was trying not to get carried away….

I picked up some outdoor games from the dollar bin at Mic.haels just to have on hand in case some of the kids didn’t want to go the playground, but I tried to restrain myself don’t go overboard with this, the kids may not even play with these! Wrong! The bubbles and hula-hoops and styrofoam airplanes and sidewalk chalk was a huge hit! Some kids never made it to the playground because there was so much fun at the campsite, so my worries about the distance between the site and the playground were for not!

The only downside of the party, was that I spend too much time hosting and didn’t spend much time with Kate. Honestly, there were times when I had no idea were she was and was just hoping that someone was watching her. I’m grateful for my aunt and uncle who not only watched her in the morning while we went to set up, but captured most of these pictures as I didn’t take any at the party. Although it’s time consuming, I feel like I’m getting pretty good at hosting birthday parties and I’m learning how to be better and more efficient each year. This year, the only thing I asked Husband to help with was scanning and emailing the signed permit to the Parks Department, and picking up balloons and ice on the morning of the party. He and I carried the coolers full of ice and Sheldon helped him carry the tents and tables, which I had packed into the his car. I think the only thing he carried on his own was the travel folding chairs while I lugged up the crates of beer, water, food etc… Yet he said to me while we were cleaning up “How about next year we do her party at Chuck E Cheese?” 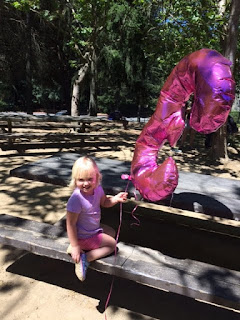 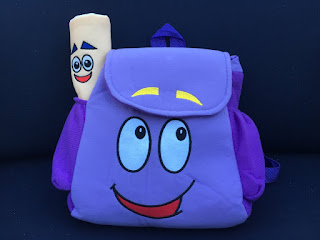 Kate’s Birthday Gift -her own Backpack and Map!