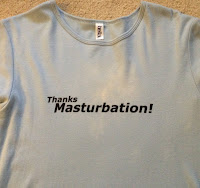 Seriously, what words of encouragement can you offer to your partner when he is headed off to the masturbatorium? (yes, that is an official term) 'Good luck'? 'Go get 'er done'! or 'Lie back and think of England'. I decided you can never go wrong with a StarWars reference: MAY THE FORCE BE WITH YOU!
Posted by jAllen at 22:15