"What are you doing for the rest of the weekend?" the medical assistant attempted to make small talk during while my RE was prepping the ultrasound probe during a previous monitoring appointment. "Painting and running" I replied, trying to be as brief as possible. "What medium?" he asked, pausing mid-roll. As someone who can't draw a straight line with a ruler, I laughed a little to myself at the thought that I could be painting creatively. Since technically, he is a participant in the game, I decided to tell him about about the 2013 Challenge -our quest to see if I could become pregnant before finishing painting the cabinets and trim in our kitchen. "Well, most likely it will be getting pregnant." he said confidently, but then inquired about the details with our project to assess what we were up against. At that point in time, I had six doors in process, nine more to go, plus a rack for the window garden and we haven't even picked out the materials for the trim. "Well, maybe you can get up early in the morning to do some work..." he suggested. Those words sounded eerily familiar, as if it's not already annoying that he and Husband have the same first name. "You sound like my husband" I replied with a slight snap to my tone. I think he realised that he struck a nerve, and apologised immediately. Meanwhile, I was wondering why he was encouraging me to finish my kitchen project quicker, as it gave more latitude toward his involvement if I took my time.

Well, in the duration of an IUI cycle, I finished a batch of doors. As some may recall from my prior Update, Husband placed the handle on the wrong side of one. The repair is pictured above and below is the progression of our renovation: 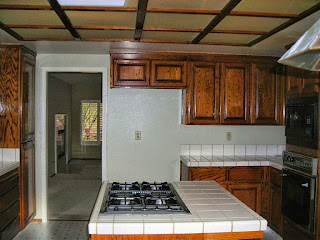 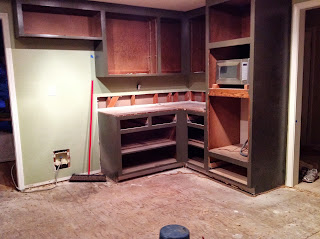 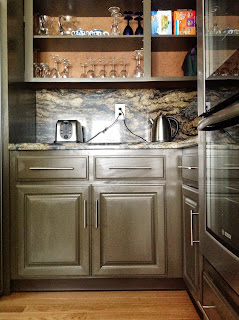 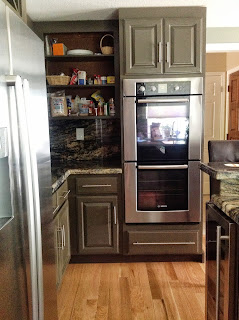 After our last IUI, I felt that I had reason to be optimistic. Not only because our numbers looked good, but that morning just felt like we had the wind at our backs. It was as if you were driving through town and every traffic light is green. I had a great set during my morning swim, my patients were straight forward and I got out of the office in time. Best detail of all, I didn't have to go back until the afternoon, so Husband and I enjoyed a post IUI-coital lunch together. It was a beautiful sunny and warm day. Almost too ideal.

It was the night before test day. Husband and I shared nervous looks with each other as we acknowledged that we were less than eight hours away from learning if we were successful. I woke up at 3:30 in the morning and couldn't fall back to sleep. Around 4 AM, I was still awake and I noticed that Husband was also up. Apparently, he couldn't sleep either. It was time to just face the music. I got up and did my test. This time I waited in the bathroom, I figured you can never floss enough and went to work until my gums bled. I kept checking the stick, but the blue line failed to appear.

I climbed back into bed. "I'm sorry," Husband whispered to me. "I'm sorry, too" I replied. This time the disappointment was palpable. Our prior cycle was such a long shot that the BFN seemed procedural. We both believed we had a chance this time around. I can only imagine how discouraged he must be feeling. I know he carries a sense of pressure on himself to come up with a good count and I'm sure we were both doubting our prospects if we couldn't succeed with our best numbers to date. I wondered if it were possible that we could both have our best performance in the same cycle again. My cat's animal instinct sensed our grief and he jumped up on the bed and snuggled next to me.

I was planning on swimming that morning, initially thinking it would be the best place to metaphorically drown my sorrows after a BFN. However I had a long day ahead of myself and really needed more rest. I decided that if I feel asleep before my alarm went off at 5:15, I would skip my swim in lieu of another hour of shuteye. I slipped into a rather deep slumber and actually slept through my alarm. When I woke, I wondered if it had been a dream. Maybe I didn't POAS yet and there was still an opportunity. Unfortunately, I had left the test on my bathroom counter. I'm not sure who started the urban myth that a pregnancy test can look positive after it dries. After ninety minutes, there was still only one line. I recalled that I once had a patient who told me she heard that you can get a positive pregnancy test if you put it in the microwave. I replied that you have to interpret your unadulterated pregnancy test. Fixing a test to make it look positive, won't actually make you pregnant. A few staffers in the clinic were tempted to try it, but decided against cooking urine soaked sticks in the same place where we reheat our lunch.

I threw the test away and sent an email off to my RE's office inquiring about starting our next cycle. We may have lost this round, but I still like our chances the longer we stay in the game.
Posted by jAllen at 05:27