I've previously described that taking prenatal vitamins when you can't get pregnant is akin to taking birth control pills when you're not sexually active, but I have to re-assess that analogy. If I had been really determined in my early twenties, I think I could have found someone willing to sleep with me; but even with assisted reproduction, I can't knock myself up. I think my resentment for these nutrient supplements started when we were officially TTC and I bought my first bottle at Target. The clerk congratulated me on my "pregnancy", but I felt so silly explaining that I was only trying and wasn't actually pregnant, so I smiled, lied, and changed the subject before she could ask any details.

I know there is a medical rationale for starting vitamins early, but the daily ritual just makes me feel so desperate and pathetic. I feel like a fraud, diligently taking these pills that really aren't meant for me. I picked up the chewable gummy preparation, as I struggle swallowing pills and all vitamins taste horrible, but now I appreciate that they seem more like a candy snack rather than something medicinal. I also started ordering on-line, but recently Target was offering a $5 gift card if you purchased two bottles, and I couldn't resist a deal. As I queued to be checked out by a young male clerk (who did not comment on the items), I wondered if I would become pregnant before finishing the two 90 count bottles. Thus, a new challenge was issued. If my uterus is still empty by the time the second bottle is, I will switch to a generic multivitamin and folic acid supplement. I'm convinced the cartoon pregnant woman on the bottle is mocking me.

5 days past IUI #3, I read a fellow blogger's post on the woes of progesterone supplements and I suddenly realised that I hadn't started mine. I could offer a few plausible explanations. I was due to start on a Saturday, which happened to be the day of a 10 K run, followed by Co-worker's baby shower, a first birthday party and finished with a leaving party for another friend. I was hardly home for five minutes. Additionally, as one of Husband's hockey friends stayed with us for a few days, I hid all my fertility related products. To an extent, they were out of sight and out of mind.

Yet, I couldn't escape the notion that this was more than an oversight. I hadn't started my progesterone supplements, because I knew then that this IUI was not going to be successful. I would merely be going through the motions, because it was expected of me, but not because it was serving any purpose. I began using them anyway, but skipped many days. I had finished off the bottle that was prescribed to me when I was pregnant and Co-worker gave me her unused supplies. It was easier to use leftovers that otherwise would have been discarded, as I can't bring myself to fill a new prescription for suppositories that will ultimately be used in vain.

It also made for a much easier two week wait. I wasn't in any kind of limbo wondering if I could be pregnant. I thought ahead to the details for our next cycle and our intentions to do IVF later in the year and I often forgot that I actually was in a two week wait. Still, test day arrived. I knew it was a formality at this point in time. Taking my monthly POAS tests is beginning to feel like opening a soda bottle when the distributer is running a give-a-way contest, "One in ten WINS!!!" -which is probably much higher odds that having a positive pregnancy test from an IUI procedure. Not this time: 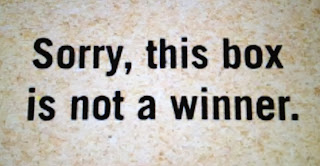 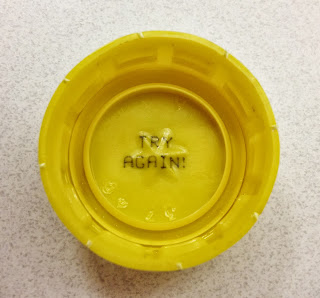 Three strikes. Yet, we're not out.