I've discussed in previous posts about my decision not to disclose any of our TTC intentions or infertility and miscarriage struggles with my parents. Many years ago, I told them that I didn't desire to have any children (which was the case at the time) and I haven't updated them on our change in plan. I'd rather have them think that my stubbornness is the restrictive factor, and not our biological limitations. I don't want them to follow the disappointment of our failed cycles and I truly want to present the ultimate surprise of their lives if we ever are successful. In particular, my mother and I don't have the kind of relationship where we share personal details.

Since we've started TTC, she's only raised the issue with me twice. While visiting shortly after Myrtle's announcement, my mother and I dished that we both weren't keen on the name Myrtle was considering if the baby were a girl. "What names do you like?" she asked. Maybe I had one too many glasses of wine, as I told her our selected names. "Oh! I'm going to dream about little Jack or little Kate!" she gushed before heading off to bed. How funny that while she was dreaming, we were in my closet quietly engaged in what eventually became unsuccessful coitus.

Later that year, when we were in England for the Olympics, Husband and I arrived earlier and stayed with his parents for a few days before mine met us in London. I had my hysterosalingogram performed two days before I flew out and I still had my paperwork with my authorisation in my purse. I took it out and left it folded over on my night stand. A last minute change in plans had my parents spending our last night with us at my in-laws. We let them stay in Husband's old room and I forgot about the paperwork, until Husband picked it up the next morning. I tried to reassure myself that I didn't suspect my mother would snoop. As we were driving to the airport, she asked if my 42 year old cousin was planning to have her tubes tied during her upcoming repeat Caesarean delivery. "Is that what you would recommend professionally?" she inquired. I replied that she still has fertility potential and is at a higher risk for a miscarriage if she does conceive again. "I know you don't plan to become pregnant, but do you ever worry that wouldn't be able to carry a pregnancy?" she inquired. I responded that most miscarriages are due to chromosomal abnormalities and not uterine structural issues (oh, the irony). However, I questioned her choice of words be able to carry a pregnancy and wondered if she may have looked at my paperwork. As a nurse, my mother can figure out what a hystersalpingogram is.

As Husband has to umpire at a hockey tournament every Thanksgiving, I'm left on my own that weekend. I've started setting up our artificial tree during his absence, but wait until he returns to decorate it together. (Although decorating it together really means he drinks beer and watches football while I put the ornaments on, but at least we're in the room at the same time). As we were celebrating the news of our positive pregnancy test, the boxes of ornaments remained un-opened. Despite my warnings of not getting ahead of ourselves, we spent the next two weeks, discussing everything from testing, when and how to announce, re-locating Husband's home office to life insurance. Then in the last full week before Christmas, I miscarried. Shortly after, I finally noticed that the tree was still bare -although it did have lights, as we keep them on each year. Not necessarily out of mourning for our pregnancy loss; I decided I couldn't be bothered to decorate at that point in time, since I'd just be packing everything back up in another two weeks. I simply put the boxes of ornaments back in the closet.

It was a bit difficult talking with my mother shortly after the miscarriage. I did my best to convey that everything was business as usual, just so her maternal instinct wouldn't pick up any sadness in my voice. She let me know that she had shipped our presents and asked me to call her when they arrived. It was a late Christmas Eve delivery, but I opened her package and found my old Christmas ornaments. I called right away and confessed that I had been too lazy to decorate our tree, so her gift was perfect! I know her underlying motivation was just to clean more stuff out of the attic (every time she visits, she brings more old relics) but to me it just felt like some how she was able to offer her support, even if she didn't know exactly what I was going through. 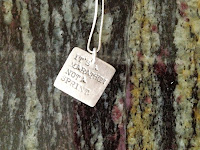 More recently, she sent me this necklace for my birthday. She picked it up for me when she was at the Boston Marathon. It's a bit funny to me, as my mother doesn't really know what race distances I run. She just knows that I run races and have my bibs and medals hanging in the guest closet. I've done a handful of half marathons, but especially after bailing on an 18 mile race, I'm not anywhere close to running a marathon. I appreciate the slogan on the necklace, as when I was dealing with Myrtle's quick conception and discovering our infertility issues, a fellow infertile described "it's a sprint for some, and a marathon for us." I found this analogy to be very accurate and I discussed in my post, A Marathon versus a Sprint , that while sprinters seem to attract all the attention, it's marathon runners who command respect. Almost anyone can run 100 metres, while only a few have the strength to endure the longer distances.  I wore the necklace during my last IUI procedure, which was especially comforting as Husband had to take a friend to the airport and couldn't attend.

Maybe I'm just grasping at straws to feign that my mother and I have an unspoken communication and understanding. Sort of how Jessa from HBO's Girls was trying to will a connection to her father:

I got a text from him the other night, which are few and far between, and it was just a bunch of random numbers and letters, but I felt that it was something, it felt like he was trying to tell me something...I think it was some sort of sign...