I remember watching the episode of The Office when Pam returns after having her first baby. "How was maternity leave?" she repeats the question asked by the never seen nor heard interviewer. "Oh, it rocked. It rocked my ass off." It has only been one week, but so far, my leave has been rocking my ass off.

I felt oddly emotional as I headed into my last day. I wondered what it would feel like to wake up on Monday morning and not have to go into work. I didn't get to have that experience until Tuesday as I had a 9:00 fetal monitoring with Co-worker on Monday morning. It was as if it were just a regular day. Except I got to wear open toed shoes and I had my swim suit on under my clothes as I planned to attend the noon swim class. During my last week, I scanned myself on a daily basis to confirm Jate's position. He/she was head down on Monday and Tuesday, flipped transverse on Wednesday, and was back to cephalic on Friday (I checked twice that day). I suspected baby was transverse again on Sunday night, which Co-Worker confirmed on Monday morning. Interestingly, in the complete oppositie direction from Wednesday. I felt so defeated. I was now 37 and a half weeks. 97% of babies are head down by 37 weeks. Once again, I was in rare minority. I hated having one more issue. One more potentially complicating factor. Okay, I get it. I suck at pregnancy. I really, really suck at pregnancy. Husband had started to become alarmed after doing a Google search on transverse position. He also tried to bribe baby to turn head down by promising him or her a kitten. I left my appointment to go swimming, which was my first time in the pool in almost two months. While we were doing our kicking drills, I felt a flipping sensation inside. Jate went head down again and has stayed in that position. I've been palpating myself somewhat obsessively to confirm. At least once an hour. 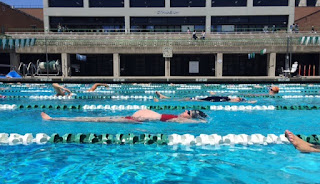 "One of these things is not like the others..."

My final ultrasound to assess my placenta was scheduled for Thursday morning. I wanted to be prepared in case the perinatologist advised me to be delivered the next day. I completed my necessary errands. I prepared some meals to put in our chest freezer. I gathered items to bring to the hospital, although I haven't yet packed them into a suitcase. (For a great list of what to pack, check out this post from Climbing the Pomegranate Tree) It wasn't all work, as Husband suggested that I should spend at least part of the day with my feet up. Wimbledon! The Women's World Cup! Don't mind if I do! I couldn't have planned the timing of this leave any better! It has dramatically reduced the swelling in my ankles. My feet are still a bit puffy, but I lost two pounds, which I'm pretty sure was all water weight. At times, I felt a bit guilty. If I'm able to swim, cook and run important errands such as getting my bits waxed and squeezing in a pedicure, then I should be able to work. Although the swelling has improved in my feet, it's become worse in my hands and I have carpal tunnel syndrome. I feel that I would struggle performing certain procedures. At least, that's what I keep telling myself. 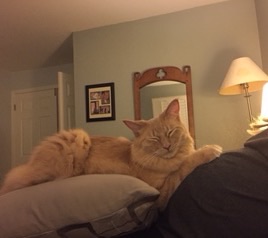 Tyler has been keeping me company during my feet up time.

I had been counting down the days until this scan, as it would finally once and for all, answer the questions that had been on everyone's mind for the past twenty weeks. What would be the mode of delivery and when? I was less concerned about the mode of delivery and more curious about the when. I know how selfish this sounds, but I was really hoping for an extension that would grant me some more days of this wonderful leave. I think I have to also acknowledge that I'm freaking out a bit as we may have an actual baby really soon. Despite the pregnancy and preparing the nursery, it hit me when Husband installed the car seat and we took it to the Police Station to be insepcted. I'm driving around with a car seat in my car! Are we really ready for this? We know that this baby is going to change our lives as we know it, but how are we going to react to this change?

The technician must have obtained at least twenty measurements of my placenta and the furthest distance she could measure from the os to the placental edge was 1.8 cm. It would need to be more than 2.0 cm to permit a vaginal delivery. Jate's head was pretty high while she was taking the transabdominal measurements, but the head was more engaged during the transvaginal scan. As the head moved lower in the pelvis, it brought the placenta closer to the cervix. Half a centimeter to be precise. That seemed to seal the deal. A vaginal delivery was just not in the cards for me. I'm okay with this. Quite at peace with it, in fact. Even if the placenta had moved enough, I had decided that I would request a C/section rather than an induction if I didn't go into spontaneous labour.

The Perinatologist was detained at the hosptial and wouldn't be back until the afternoon. I was waiting for his phone call while everyone who knew we would be receiving news was texting and emailing me for an update. He called after 5:30. As he still hadn't left the hospital, he didn't have a chance to look at my images. I reported the findings as well as the recent issues with Jate's presentation and a summary of my blood pressure readings. As long as my blood pressure is within range and baby stays head down, I can schedule my C/section at 39 weeks and 4 days. My maternal side is so happy that Jate will be delivered after 39 weeks. Selfishly, I'm happy about having another week to myself. The doctor offered that we could do one more scan on the day of my Caesarean and if the placenta has moved enough, then we could convert to an induction. NO THANK YOU!

Although, it brought such a sense of relief to have this decision made and to finally have it scheduled, I had to admit to myself that I would proabably always be jealous of Myrtle and the fact that she was able to experience the wonder and beauty and all the glory of a natural vaginal birth. As I filled her in on the details, I asked if her husband slept at the hospital. (I told Husband that he can sleep at home, so at least one of us gets a good night sleep) "I think he did." she replied "We were both so tired as I was up the entire night while I was in labour..." I realised this was my opening for a C/section Women are Smug moment: "Yeah, I was offered if we wanted our case to be at 7:30 or 12:00, and I chose the noon time slot, so we'll have one last morning to sleep in..."