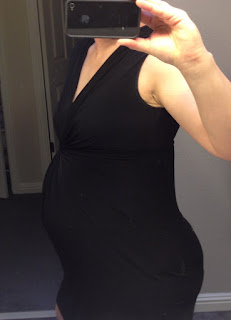 Sometimes I'll catch a glimpse of myself in the mirror, and I'll think 'who is that pregnant woman?' I'm still in a state of disbelief that after so many years of not wanting to become pregnant, and then not being able to get pregnant when I wanted to, that the reflection is actually me. More so, I'm amazed at how much I've enjoyed being pregnant and how much I've cherished this opportunity. Once we were seemingly out of the woods with the accreta scare, and the potential for life threatening complications were no longer making us question if we shouldn't have pushed things and should have accepted that we weren't meant to have any babies grown in my uterus, we could finally embrace the pregnancy and almost appreciate that we may have a little baby in our arms at the end of this all. By week 27-28, Jate became very active and I felt myself wanting to savor every kick and every hiccup. I could already appreciate a sense of nostalgia. I am going to miss being pregnant.

Although I won't say never, the probability is very high that this will be our one and only pregnancy. If we're fortunate enough to have a healthy mother and healthy baby from this experience, we don't want to tempt fate again. I hate the thought of going through the uncertainty of another transfer, an agnosiging beta wait, and all the lurking potenial obsetrical complications we could face after making it through the first trimester. Not to mention, we're not getting any younger. We won't officially make any decisions regarding our embryos for another year or two, but I already decided my post partum contraception will be Nex.planon. I was an IUD user for 10 years, but if my ute makes it to the end, I'm going to give her a well deserved rest. Plus, Nex.planon inhibits ovulation. After spending three years determining when or if I was ovulating, I don't want to ovulate at all for the next three years.

I managed to make it to the third trimester before wearing any formal maternity clothes, although I had picked up a few larger sized items and some stretchy material skirts by the time I hit twenty-four weeks. I had always vowed that I would never wear maternity jeans with the large stretch panel, so I managed to make do with a Bella band, even though it is essentially the same look. I shopped conseignment stores for a few maternity dresses and tops, but I did go to a proper maternity boutique to get one new dress. I felt a bit smug at the check out, as the woman at the till next to me had filled three shopping bags and she was barely at the half way point. So far, I've managed to escape any stretch marks, thanks to the genetics from my mother and a European cream not available in the United States. I had purchased some when we first started trying to conceive, because I had to be prepared, and my prediction came true that it expired by the time I was actually pregnant. It would cost over $160 to purchase through Ama.zon.com, but Husband procured a few bottles for less than £20 while he was in England. Apart from my pre-Thanksgiving irrestible desire for Tater Tots, I haven't had any food cravings and my appetite has been pretty normal. As of 34 weeks, my weight gain was around 23ish pounds, although it could vary by 2-3 pounds depending on my swelling, but it stayed in that range until the end. I've been trying not to obsess (too much). I had wanted to keep the total gain closer to 20 pounds than 25 pounds, and it became frustrating as my weight kept increasing depsite maintaining approximately the same caloric intake. My OB appointments felt like a reverse Weight Watchers weigh-in. Myrtle had gained 15 pounds by the time she was 18 weeks and was up 35 pounds by 32 weeks, so I imagine she must have been between 40-45 total gain by the time she delivered. I know it's not a competetion, but I'm winning in at least one category.

Since the early weeks of my pregnancy, I've had some nights with interrupted sleep. It's the middle of the night and I'm wide awake. Recently, I've been getting up and trying to do something productive, so I can somewhat adjust to being functional at night. I'm still fairly comfortable while sleeping, and I find that I'm actually able to sleep on my back. It makes me silently chuckle when women present for their first visit and are concerned about sleeping on their backs. Overall, my energy level is rather high and I don't feel too fatigued. I feel very fortunate that I don't have any aches or pains. From my own experience,  I have become more convinved about the benefits of exercise during pregnancy. It seems to follow the 'body at rest, stays at rest and a body in motion stays in motion' philosophy. I feel that if I were less active, I would be much more stiff and seized up.

I do miss running and I hate that I have to delete the many emails I receive for local races and events. I had wanted to continue running and had planned to run a half marathon at 16 weeks, but I developed plantar fascitis. My running shoes were long overdue to be replaced, but I had many races in November and December, and I didn't want to run with new shoes. I had also changed my pronation due to the pregnancy and the combination of those factors wrecked my feet. Since the main treatment for plantar fascitis is rest, I figured this would be the best time. I also really miss my ankles. I don't know why, but I was naive enough to think that I was going to be immune to the swelling effects and I was devidtated on the day that I looked down and saw that I had cankles. I had to banish my favourite pair of Mary Janes to the back of my closet as I discovered that it was not a good idea to wear any shoes with a strap. I purchased a pair of basic Easy Spirit black flats which are made of a very comfortable stretchy material. Still, my lower extremities look like baggettes stuffed into shoes. Husband has commented that my ankles look very similiar to Tyler's paws. I was offended, but his observation is pretty accurate. 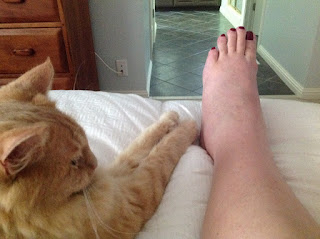 I have loved not knowing the baby's gender. So many people have said to me "Oh, I don't know how you can do that! I'm way too impatient!" Honestly, I'm still not anxious at all to find out. I supposed I'm applying a bit of the Monster at the End of the Book tactic, which is the longer I hold out on knowing, the longer I can hope for a girl. I honestly have no inclination either way. Sometimes I've had a certain feeling or vibe from some of my patients that has lead to an accurate guess, but I have no speculation on my own baby. There seems to be an almost 50/50 split between the conjectures of my patients, staff and friends. I've been running scenarios through my mind where I hear my OB declare "it's a girl!" or "it's a boy" just to try to prepare myself. Oddly, I've had two dreams where they baby was born, and we still didn't know the gender.

So far, there have been no significant labour signs or symptoms. Although, I'm a bit embarassed to say that I'm not entirely sure. It's been ages since I used to sit an palpate a labouring patient's contractions. Some times I'll feel a vague sensation of tightness or hardening, but I can't tell if it's just Jate moving about. I've decided it's akin to determining if a woman had an orgasm: if you have to ask, the answer is probably 'no'. My cervix has not been able to be checked due to the low lying placenta, but I've felt some odd twinges toward my vagina, so it may be effacing a bit.

Best moments of the pregnancy? There have been so many, which is why I'm going to miss being pregnant so much. The highlights definately include seeing the smile on Husband's face when Misery announced that my beta was 175. Watching the vivid and dark test line appear on the First Response Early Pregnancy Test. Making my mother cry when she first looked at the ultrasound photo. Receiving an email from my Dad celebrating each week, often with a silly poem that he wrote. Feeling the clumsy thud that announced Jate's presence for the first time. Noticing that Jate seem to kick more often while I would be listening to the fetal heartbeat for one of my patents. While the 25 minutes inside the MRI machine, was not a highlight, receive the news that I looked to be clear on an acreta certainly was. Planning and decorating the nursery was quite a bit of fun. I ordered so much online, it felt like Christmas as so many parcels arrived on our doorstep. My aunt and cousin hosted a baby celebration event, which is not to be confused with a baby shower. While I was so thankful for their efforts, I was quite nervous as my aunt is one of the most disorganised and infocused people I know. I arrived earlier than instructed as I figured we'd have to help with food prep and other arrangements. When I walked through the door, my aunt announced that everything was under control, thanks to a special helper. My mother flew out for a surprise visit. I was so thrilled to see her and was so relieved as I knew the party would go off without a hitch. (My mother did state that she had to crack the whip to make sure all tasks were being done). The event was a perfect celebration with friends who have supported us through the disappointment of every failed cycle to the triumph of a pregnancy that might finally produce a baby.

Most of all, I've loved sharing all this with Husband. I'll especially miss lying in bed at night with his hand on the bump to appreciate Jate moving about. I love the way he talks to the baby as I love seeing how excited he is about becoming a father. He caught me bump smuggling one day and commented, "It's such a beautiful sight. It's something I thought I'd never see." Neither did I. It's been such a privledge to experience this pregnancy. Perhaps, I've enjoyed a deeper appreciation after infertility and pregnancy loss. 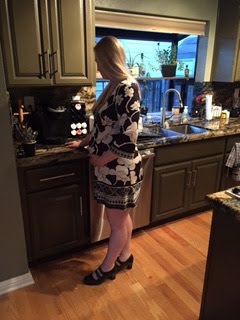