The morning after we brought Jate home, I walked into the kitchen to make a cup of tea. My hair was a mess, I hadn't yet brushed my teeth and my top was soiled with formula, breast milk, and a bit of baby spit-up. Upon entering the kitchen, I stepped in cat puke. Welcome to my new life.

For many years, even before we thought we wanted kids and before we were trying to have one, our friends who were parents warned us about what would happen. Sleep deprivation. All your time would be consumed by caring for the baby. Personal freedoms no longer exist. It was going to be hell, and we just had be willing to go into battle. To my surprise, I found that it wasn't that bad. The sleep deprivation wasn't nearly as rough as when I was pulling all-nighters during my University days. Of course the difference then was that I could go to sleep if I wanted... The physical exhaustion was worse when we bought our house and we were spending after work hours on renovation projects. A few of my postpartum patients told me that I looked like crap. I found that I had to lower expectations on what I could accomplish during the day, but performing small household chores actually helped me feel normal. The one thing everyone forgot to yield warning was the cabin fever.

There really is no consensus on when a woman can drive after a C/section. One nurse told me that the concern is more about driving under the influence of narcotics or exhaustion than worry about opening the incision. However, as I still had pain getting in and out of a car, and as I drive a manual transmission, we thought it would be appropriate to wait at least one month. Until Jate was able to take a bottle, I had to be available to feed, which could be as frequent as every hours, so I couldn't go very far from her for any length of time. Although I'm a believer that exposure to germs is essential to build one's immune system, we wanted to avoid bringing her out in public for the first month of her life, and thus I was sentenced to house arrest.

I started to resent Husband as he was still attending Cross-fit a few times a week. He asked if he could accept an umpiring assignment. Here was my answer; 'If you go and she's fine, then my answer is yes. If you go and end up leaving me with a crying baby all day, I'll be pissed at you.' In the end, I agreed that he could go, so long as he came home straight after. No grabbing a beer after the match. The day before the match he shared a text exchange with another umpire who was arranging the post-match drinking session. "Beers at my place after?" "No." Husband dutifully replied "I have to go straight home." "Oh C'mon, you can't stay for just one!" I know he was sharing this with me to show his restraint, but also to let me know that he was being pressured. As my parents were still staying with us, it wasn't so much about being left with the baby, but I was so jealous of his freedom.

My parents tried to arrange small trips to get me out of the house. Taking the recycling to the local collection point became the high point of my day. Even more exciting; the glass receptacle was full, so we had to go back another day! I just had to be patient and wait until the end of the first month. As soon as Jate was established on the bottle, my mother and I went out to get pedicures (with my Dad dropping us off and picking us up). I felt relieved when I learned that she slept the whole time we were out, but I don't feel guilty saying that I wouldn't have minded if she had woken up and Husband had to deal with a crying baby... 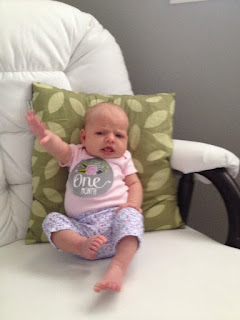 "Talk to the hand!'
Only one month old and she has sass

Nicknames: I'm the only one who doesn't have one for her.
Husband: "Button" My Mother: "Little Bunny" My Dad: "CupKate"

Eating: So far very cooperative. She latched on well right from the start and my supply has been able to meet her needs. Actually, my cup runneth over, as we discovered that I have an overactive letdown. Within seconds of her latch, milk would be dribbling out of her mouth and all over both of us. We would both need to be changed after each feeding. The lactation consultant recommended nursing in a reclining position, which helped a bit, and I would hand express about half an ounce before each feeding. I also tried nursing from just one side at a time to avoid a second exposure to the nipple fountain. We introduced a bottle of expressed milk at three and a half weeks, which she took to it, and still wanted to nurse at her next feeding. I learned that the term 'nipple confusion' is a bit of a misnomer. It's actually more about the effort required by the baby. The milk flows through the bottle faster and the baby doesn't have to work as hard. If the bottle is introduced too early, the baby will find it easier and develop a preference. If the bottle is introduced too late, baby may not be interested (possibly due to an attachment to mom?) We've been successfully feeding 1-2 bottles per day, which translates into maternal freedom! Our next challenge is to offer some thawed milk. I've read that the freezing and defrosting process can change the taste a bit, and some infants don't like it. I so hope that's not the case, as we're really banking on the bags of frozen milk in our chest freezer.

Sleeping: Not too bad. Apart from the first two nights which involved an all night session of inconsolable crying, she sleeps pretty well at night, which makes her daytime fussiness much more tolerable. She had been following an every three hour pattern, which usually occurred at midnight, 3 AM and 6 AM. This was some how more acceptable than a 1 AM/4AM or a 2 AM/5AM session, since I usually could be awake at midnight or 6 AM, so it really only seemed as if we were getting up just once a night. Our paediatrician suggested not letting her sleep longer than two and a half hours during the day, to see if she'll sleep longer durations during the night. So far, she stretched her 3 AM feeding to 4 and the 6 AM to 7, which granted us seven hours of sleep, which is almost functional.

Likes: Vacuuming! After the car, her pram and a hair dryer. The vacuum is the next object with magical baby calming powers. I'll hold her in one arm and push the vacuum with the other. Our carpets would usually only see the hoover once a week, maybe twice if they were really dirty. Now they're getting groomed every day. My floors have never looked cleaner! Who says you can't do household chores with a baby! Other enjoyable activities include peeing on her changing table and spitting up in her car seat.

Dislikes: Tummy time (which may be why she turns it into back time). Really hates having her diaper or clothes changed. Wasn't too keen on the Rock and Play at first, but now will sit for her 'quiet alert' time and will often drift off to sleep. She did not like the baby K'tan wrap carrier, and I feel nervous with it and would still hold her with one arm, which somewhat defeated the purpose of the carrier. I picked up a Baby Bjorn at a children's consignment shop (I was wary of paying the high price for one and risk that she wouldn't tolerate it) and she does much better in that carrier as it has more defined support. Still not sold on it. I'm thinking she'll like it better when she can be outward facing.

Looking forward to: When she had head control.

Milestones: The big one is that she rolled from tummy to her back at 9 days old. We figured it was just a fluke, or maybe my floors aren't level. So the next tummy time session, we videoed her on the mat, just so we would have proof on the off chance it happened again. She rolled again. Twice that day and pretty much every time we've attempted tummy time. When we decided to use a pacifier, I picked up two "WubbaNub" pacifiers that have little stuffed animals attached as I thought they would help keep the paci in her mouth. Recently, she seems more interested in the little stuffed animal than the paci, which will be great when it's time to cut her off from the pacifier, we can literally cut off the pacifier and she'll still have her stuffed toy. Our pediatrician was impressed that she will hold it with both hands, and I think she's actually starting to reach and grab it, as I seem to find it in different places. 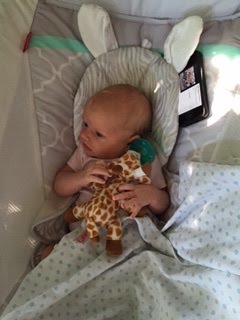 Diapers: I was (and still am) really hoping to use cloth diapers, but within a few days of introducing them, she developed a raw area of skin break down on her cheeks. Our pediatrician suggested waiting until she is 6 weeks old and her skin is not as delicate. In the meanwhile, we've been using Pamp.ers Swaddlers and I have to say that I really like the little line that turns blue to indicate that she's wet. It almost makes me forget about how much is accumulating in the landfill. We are using cloth wipes, which are working very well and I have cloth breast pads, but I soak though so easily that I go through them so quickly that I need to use disposable ones at night and if I go out. Sigh. I'm trying to be an Eco-mom.

Clothes: I purposely didn't get too many newborn onesies as I figured she'd go out of them very quickly, but she's still fitting in them, which means there isn't much variation in her wardrobe. My dad insisted one dressing her in the 3 month sized clothes as he felt it was easier (both he and husband struggle to dress her) but she was swimming in those onesies.

Illness: Other than the diaper issue, NO health concerns. Whew!