I've often held that you should not host guests nor be a guest in someone's house for more than five consecutive days. However, when your parents and in-laws live on the other side of the world, it's hard to hold them to a five day maximum stay. My parents stayed with us for two weeks at Christmas, but the business of the holiday season and working during one of those weeks, helped to avoid any over-exposure conflicts. I wasn't sure how we would manage nearly five weeks together, while caring for a newborn, something joyful and yet stressful. I can honestly say that I enjoyed that time spent with my parents and I will forever be grateful for all their help and support. My parents did all our grocery shopping and prepared dinner each night. I don't think we've ever eaten so well. Although they didn't wake up with us during the night, they would offer to watch Jate or take her for a walk, just to let us shower or eat. They also consoled me when I broke down in tears and tried to install confidence that I was doing a good job.

My Dad completed the final projects for our garage renovation. I tend to forget that it takes him much less time than if we were finishing these tasks, and I almost wish we hadn't worked so hard in the final weeks of my pregnancy, as it would have left more for my Dad to do during his time. He did find some other projects, such as building new window screens (I accidentally trashed some when we first moved in five years ago, so we've been selective about which windows we leave open), fixing our wonky breakfast table and removing a small tree in the front garden to allow more light in the kitchen. My mother planted a small herb garden and worked on knitting a matching hat and sweater set for Jate. Yet, it's a weird dynamic to be an adult and have your parents living with you. One night, while Jate was sleeping, we finished dinner and I started to clear the table. My mother started to insist that I needed to go to bed. It was only 8 PM, and despite being woken up every two hours, I actually wasn't that tired. Still, my mother continued to press that I needed to go to bed. Now I was refusing out of spite. I'm 39 years old with a child of my own. My Mommy can't make me go to bed anymore. I did take the pass on doing clean up, but the next morning (and into the afternoon) the grill basket was still sitting beside the sink, unwashed...

My parents often forgot that they weren't living in a small town in Connecticut and would leave windows and doors open. Twice, I discovered that the sliding door leading to our back porch had been left unlocked overnight. My Dad would leave the front door wide open while bringing groceries in from the car, thus inviting the cats to make a break for it. Yet, what was the one door they kept closing; despite being reminded over and over again to leave open? The door leading to the laundry room and the cat's litter box... It was also frustrating driving with my Dad, as he hasn't driven a manual transmission in years. I kept having to prompt him; Shift! Shift!! SHIFFFT!!!

Yet, despite these frustrations and nuances, I was truly sad to see them go. I'm so glad they were able to spend this time with their granddaughter. Especially for my father, who felt this was his redemption as he missed so much while I was an infant. I learned that my Dad thought he'd be able to take some time off, as he was in an upper management position, but he was told, "Company policy offers three days off for death of a family member. You get ZERO days for birth." I do feel badly that my in-laws weren't able to spend that time with her. Although there is no way I would have been able to handle having both sets of parents on hand.

At the same time, it was necessary for them to leave, so that we could learn to function on our own. Husband, as a Senior Application Scientist who works from home, in a house that now contains a baby, and me as a temporary Stay at Home Mom. Just before my parents left, Myrtle sent me a book with a very British title, written by a British nurse. I skipped through the first few chapters which focused on preparing for your baby and encountered her discussion on why you should have a routine. I know there are a lot of point/counterpoint arguments about putting your newborn on a schedule, and I don't want to try to engage that debate. I was a bit put off as this author seemed to suggest that having a routine was optimal for both baby and parents and she also seem to imply that if you haven't started a strict schedule, you've already fucked up, but fortunately, you're reading this book, so you have a shot at redemption. I've heard some moms express that trying to maintain a schedule added to their anxiety and created stress. Looking at her outline, I could understand.

*Baby must be awake and feeding no later than 2 PM, regardless of how long he has slept.
*Do not feed baby after 7:45 AM, as it will throw off the next feeding
*11:45; Regardless of what baby has done earlier, he should be winding down for a nap

In addition to sleeping, she also has very strict guidelines for feeding

*If he did not finish the first breast at 5 PM, give him up to 5-10 minutes on it before putting him on the second breast for 20-25 minutes
*Give him up to 20 minutes from the breast he last fed on, while you drink a large glass of water

Oh, yes. She has you on this schedule too..

*Have some cereal, toast and a drink no later than 8 AM while baby plays on his mat
*Let baby have a good kick while you express 2 oz from the second breast
*10:30 AM; Wash and sterilize bottle and expressing equipment

I needed a Xanax after just reading this schedule. I wanted the benefits of some structure and predictability, but I didn't think I could be compliant with such a rigid routine. Most of all, I wanted our "loosely organised daily strategy" to work with our activities. So, on the first day I was able to go back to swimming, I synced her nap with my swim practice and we've anchored her other naps and wake-up time around this mid-day nap. I can leave the house guilt-free, while Husband is working while she sleeps. On a few occasions, when he's needed to take an important conference call, I've arranged to take her out for a walk or run some errands, to leave him undisturbed. We've also done some Cross-Fit classes, where one person will attend the earlier class, and the other brings her to the later class to hand baby off to the one who did the first session. This is how we're making it work. Unfortunately, the one thing we're still struggling with is meal planning and dinner prep. We still really suck at this. A baby may change everything; but not all things. 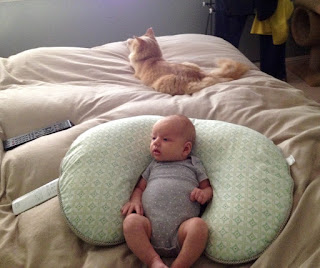 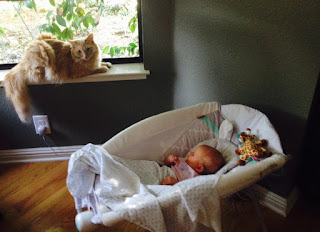