What is a smash cake?" I asked a fellow blogger, feeling a little embarassed that I didn't know "Haha" she replied "It's a tiny individual cake that the baby gets to just smash into.  Bigger than a cupcake and usually decorated kind of elaborately." "It became a thing when cake companies realized new parents will pay for anything." she added. Well that was enough to trigger my inner skeptic, and start the idea that I would make my own cake for Kate's first birthday. Afterall, my mother made my first birthday cake from scratch.

Pausing for a moment. As I have been trying to replicate some of the things my parents did for me as a baby, I've also been coming to terms with the fact that I may have a romanticised view of my childhood. On cloth diapering, I thought my parents were so environmentally conscious. [My mother's response] Oh, we really didn't care too much about the environment, Cloth diapers were just much cheaper than dispoable diapers. On breastfeeding, we were living in an expersive city on one salary, we couldn't afford formula. On my first birthday cake, yeah, I made the cake from scratch because money was tight. Also we didn't really have a party for you. We let you play with the cake and that was it.

"Plus, I wasn't working at the time" My mother reminded me as I told her about my idea to do Kate's cake. Well that was just challenge accepted! I'm a pretty competent baker, and if I were to do a regular cake, I probably could have managed that. However, I wanted to do cupcakes rather than a cake. Firstly, her nickname. They would be CupKates. Secondly, I prefer to serve cupcakes as you don't have to deal with the cutting process and people seem to be more willing to eat cupcakes, where they would turn down a regular piece of cake.Then I decided I wanted her birthday to have a Very Hungry Catapillar theme. I thought I was the first person ever to have this idea for about five minutes, until my mother googled "Hungry Caterpillar Birthday" and we discovered that nearly everyone does a TVHC birthday theme. I'm not sure why, but I began to feel more confident that I could pull this off, as I imagined it would 'merely' involve getting some cake mix, frosting and food colouring. I was already anticipating how great they were going to turn out and while I was fantasizing, of course there would be a little praise coming my way. Yes, guests would note how awesome I am; a working mom who makes kick ass cupcakes! [flips hair over shoulder]

Fortunately, I had the sense to do a dry run. I decided to have a go while my mother was visiting. As she wouldn't be there for Kate's one year mark, she could feel involved with the party. We worked together to mix the colours for the frosting. I had purchased some jelly beans for his eyes, a chocholate chip nose and some Hershey kisses for his feet. As we assembled the hungry caterpillar with our cupcakes, it wasn't coming anywhere near the image that I had in my mind. 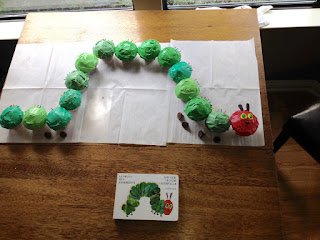 "What do you honestly think?" I asked my mother. "Well" she paused. "They look like they were made with a lot of love.' [Translation] They look like crap. As my Dad worked in food service for many years, I asked if he thought they looked totally amatuer. He gave a play-it-safe response, "You don't seemed to be satisfied with the finished product." Why are you asking for my professional opinion when you already know the answer? I waited until Husband weighed in with this thoughts. I know I could rely on him for a completely unfiltered assessment. "Would you be embarrassed if we served these at Kate's first birthday party?" I asked. He replied that he really wouldn't care, his critique of my creation is that it just really didn't represent the Very Hungry Caterpillar. "It looks more like the anorexic caterpillar." he quipped.

Oh, how I wish he had just said, "Jane, these look like shit. You're not a baker, so don't try to pretend to be one. Suck it up and go to the bakery like a normal person." I would have saved so much time and energy, not to mention money. I purchased a mini-loaf pan, as well as some decorating tools, brushing off the irony that in my effort to avoid the scam of the smash cake, I would probably be paying about the same, if not, maybe even more. We went for take two. 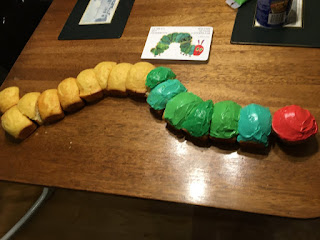 So, as you can see, Husband was right. The mini-loafs really were the right way to go, as I was able to do a better job capturing the shape of The Very Hungry Caterpillar. However, the frosting still wasn't working. I really would need to learn how to use the wedding cake style frosting that I saw in Michaels craft store, but fortunately had the sense not to buy. Suddenly, it also occured to me that I would need to spend the day before the party doing cleaning, last minutes chores and a lot of other food prep, so... what the fuck was I thinking? I didn't even bother attempting to finish, it was time to wave a white flag of plain vanilla icing on the remaining cakes. I was ready to admit defeat and started googling local bakeries.

I could hear Kate start to stir, as I was sulking, cleaning up and eating the fruits of my labour (they were delicious by the way). It served as an important reminder. This is for Kate's birthday party. She needs to be the centre of attention. Not her cake and not her mother.
Posted by jAllen at 09:51