When I was in the trenches of infertility treatments, I considered myself to be a “serious blogger”who only wrote about “serious” issues related to infertility and I vowed that I would never write such fluff pieces, such as ‘Halloween fun’. Yet, as we’ve been leading into Halloween, I’ve been composing a post in my mind, so I decided to go through with it. Then, as I sat down and started typing, I realized I do actually have a Halloween connection to infertility. Back in 2011, I had a negative pregnancy test (the first of many) after the Plan B incident on Halloween. Two years later, I was administering my trigger shot for my first failed IVF cycle in the bathroom at a bar, while wearing my Sookie Stackhouse costume on Halloween night. Then on October 31, 2014, I received the phone call with my beta results. It was 175 and rose to become Kate. I still have the voicemail saved on my phone. Infertility memories still haunt.

I really wasn’t too into Halloween as a child. We lived on a small cul-de-sac that was a good distance away from the main road. There were only 4 or 5 hours and only two other children lived in our neighborhood, so we basically went around to each other’s houses. Since no other kids came to our hood for trick-or-treating, no one had much candy to offer. The grown-ups would carry on talking, which was so boring. I think one year I went trick or treating with Myrtle and her brother and his friend in a big neighborhood, which was a lot of fun. When I was in the 6th or 7th grade, I was asked to take the kids I baby-sit trick-or-treating. It was much more appealing to be making money and I didn’t have to dress in a costume. My final experience with trick or treating was in my senior year of high school. I was leaving field hockey practice, and a teammate, who I really couldn’t stand as she had the most annoying personality, asked me if I wanted to go trick-or-treating. I’m not really sure why I said yes. Maybe it was because I had just sent out my college applications and this was my last chance to do something youthful, or maybe I felt badly for her as I suspect she probably didn’t have friends to trick or treat with when she was younger. We became the annoying teenagers in last minute costumes who drew dirty looks for being too old to go trick-or treating, but I actually had a fun time with my annoying teammate.

The one Halloween memory I will always hold, is that my mother made my costumes. The first one I recall was when I was in the first grade and was obsessed with Annie. My mom sewed me a red dress with the white collar and knit a kick-ass red curly wig. The next year she made a cat costume. When she went back to work full time, she gave me ten dollars and sent me to a consignment shop to create a costume. We never used a store bought costume. I wanted to carry on that tradition with Kate, especially when she was and infant and early toddler and didn’t have any comprehension of Halloween. I had my mom crochet some animal hats (a bunny and a dog) and I completed the rest of the outfit. Last year was the first time, she recognized there was something called Halloween going on. I re-used the Olivia Costume from her birthday, and we walked the neighborhood to look at all the decorations without trick-or-treating.

One day in early September, Kate wanted to play Nella the Princess Knight and was going through her closet and mine to try to find a Nella outfit. I did my best, but it wasn’t “Nella” enough to suit her, so I began contemplating getting her a Nella costume, if she would actually wear it for play. I found one in the regular toy section at Target, which emphasized that it was not a Halloween costume, but I figured she could wear it on Halloween, so I hid it in my closet as I didn’t want her to possible ruin it before H-night. She found it while we had cleaned out our house for the flea treatments and of course, wanted to try it on. O-M-G that think was a fucking glitter bomb. Hot pink glitter everywhere. As we were vacuuming so frequently for the flea treatments, I didn’t think it was going to be a big deal, then I discovered specks of glitter were getting stuck in the floor boards. I had to cut off the glittery skirt and I went to the fabric store to get a non-glitter replacement. She could have worn it without the mesh overlay, but the action of sewing for her costume made me feel connected to my mother.

Right after we hit the fabric store, Kate and I headed over to Tar.get to look for some pig ears (I’ll explain in a minute) She found a Unicorn costume and fell in love with it. Literally, she was hugging and cuddling this stuffed unicorn. I had a moment of weakness and relented. As Nella has a Unicorn, I figured it would complement her costume. (Kate always pairs Nella and Trinket together. She won’t wear her Nella underwear if it doesn’t have Nella and Trinket.) Once again, I justified my purchase as it is something she can play with year round. Already she’s insisted on taking her Unicorn out to dinner (we had to explain that the Pub has a no unicorn policy), to the farmer’s market, and to bed. I woke up one morning after Kate had climbed into our bed and saw that she brought Unicorn too. 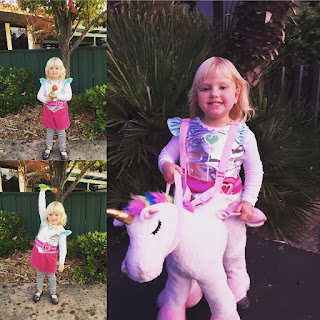 Just when I figured I had Halloween sorted. I received an email from her school reminding parents that they would be hosting a wholesome Halloween parade. So nothing scary. No masks. No war toys. Acceptable costume included professions, objects (such as a crayon) or characters from books. I decided to re-purpose the Olivia dress again. Only to find that the Olivia dress she wore a year ago, is now an Olivia shirt. I quickly found a red velvet dress online, which is actually closer to Olivia’s real dress, and took the collar I made off her old dress and sewed it on to the new one. I hope I made my mom proud. We also added bows for the ears. 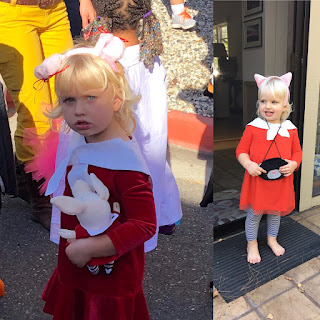 Olivia: today and one year ago

Kate’s school had a field trip to a Pumpkin Patch. The kids learned about the life cycle of a Pumpkin, toured the patch on a hayride and each got to pick their own pumpkin. I love that Kate is deadlifting hers. 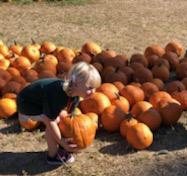 As Husband was away for a hockey tournament during the weekend of my championship swim meet (did I mention that my team WON!) I had to leave her with baby-sitters. I picked up some Halloween arts and craft projects for the sitters to do with Kate, as I thought this made me a “cool” mom. Neither sitter did them with her, so apparently not. Never mind. Kate and I did them together. 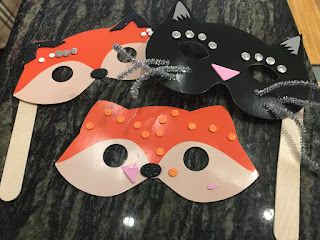 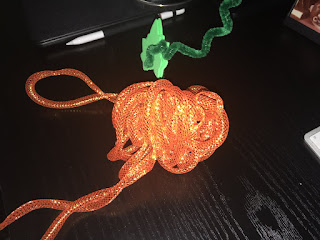 The masks came out well. The pumpkin.. not so much


Our final Halloween project was the pumpkin carving. As a I have a few tool sets, I decided to look online for patterns to download and we couldn’t resist making a Peppa Pumpkin! 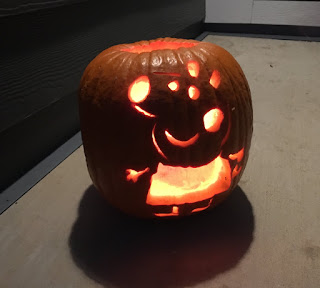 Finally we celebrated Halloween. My Dentist was hosting a Halloween carnival, which I felt was a good alternative to trick-or-treating. As Halloween wasn’t really a thing done in England, Husband perceives trick-or-treating as begging and doesn’t want her to do it and I don’t want her to get lots of candy. Co-worker started taking her boys out when they were three, but she only goes to five houses. This will be their fourth year of hitting only five houses. She is aware that eventually they will discover that you can knock on six of more doors. The carnival was just on our way home after picking Kate up from school, but I didn’t factor extra time for the traffic. It was listed as 4-7 and we arrived around 6:20. It was getting dark and they were starting to pack somethings up. If we do it next year, I’ll get out of work earlier as they had lots of carnival games. Kate did get to get her face painted. (The woman was getting ready to pack up, but couldn’t resist Kate’s charms) She got a balloon animal (which looked more like a sex toy…) We posed for pictures in a photo booth and ate pizza from a food truck that had an actual brick oven. It was pretty cool. She received a goodie bag that had some candy, a few mini packages of M&Ms and a few lollipops. So she got a little candy that night. We came home to find our bowl of Do-it-Yourself non-candy Halloween treats was empty, which means they were a big hit... or some decided to be an asshole and take all of them. I may find out when I rake leaves if any got dumped back on our yard... 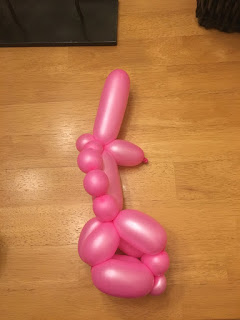 The balloon lady tried really hard to fulfill Kate’s request for a Unicorn
I didn’t have the heart to tell her it looks more like The Rabbit
Posted by jAllen at 21:57