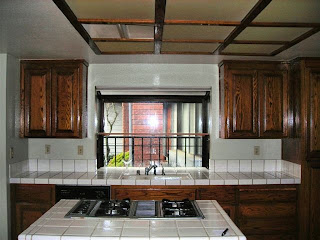 I realise that my last 2013 Challenge Update was only a little over a month ago, but as it is already the end of June; it seemed like a good time to check in at the half way point. I finished two more sets of doors, and Husband successfully installed the hardware. I also completed the plant rack that goes in our little window garden, which was really arduous. I ultimately concluded that I really only needed to make the first panel look good and I could strategically hide the other flaws.  I started growing some herbs and I'll post some pictures as they progress. 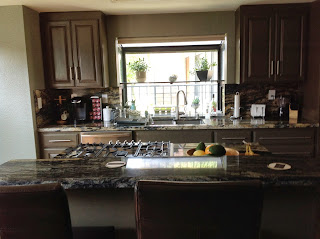 Earlier this month, I competed in my first open water competition of the season. Open water events usually feature two races, and participants can swim one or both. I only signed up for the first distance and explained that I needed to get back home to paint my cabinets. "You said the same thing last year!" My coach pointed out. Thus, I had to acknowledge that I've been working on these cabinets for over a year. I didn't get around to painting that day, as I placed 6th in my age group for the mile distance. "You'll get a medal for that!" my coach informed me and I decided to stay until the end. Open water events feature an awards ceremony, where swim meets set up a self-service table and you pick up your own ribbons.  However, the awards ceremony only distributed medals to the top three finishers in each age group. If you placed 4th through 6th, you had to collect from the do-it-yourself medal ceremony table, and they didn't even check your name. It was very anticlimactic for my first accolade in open water competition.

Despite skipping out on painting that weekend, I only have two more batches of doors to do, which will each take about 6 weeks. I am starting to accept that my kitchen project is going to win the 2013 challenge and I will be finished with the painting before becoming pregnant. Although I will be happy to be done with this task, I think it will bring a little sense of sadness. I'll have completed painting every room, every piece of trim, every door and now every cabinet in our house. Not only will I not be pregnant, but it will some how feel unsettling not to have any more DIY projects in process. We still need to select the moulding for the cabinet trim and we need to coordinate borrowing my dad's laser level. Recently, he reported that he finished with it and could send it through the post. "Wouldn't it just be easier to bring it when you visit in September?" I asked "I know you're a little nervous about it getting damaged, and you know that as soon as you send it, you'll have a project where you need it..." He agreed with me. So, not only does that buy me a little more time, as the trim won't be installed before his visit, but I also think I can get him to mark the ceiling for us. Score!

This week also marks another anniversary. It was a year ago that we had the initial consultation with our RE. As he was rather optimistic at the conclusion of our visit, I didn't think we would still be in each other's lives 12 months later. I wasn't naive enough to think I would get pregnant after my first treatment cycle, and I never could have imagined the delays from Husband starting Clomid, a spontaneous conception and miscarriage, or discovering my uterine septum; but for some reason, I just didn't think we would still be here.

It wasn't so much the inevitable BFN with our last IUI that called our game plan into question; it was the fact that I was so certain of the outcome long before I peed on the stick. I know IUIs have a low success rate. Statistics show that they don't hold much advantage over timed intercourse, and other studies note that IUI may not be an effective remedy for male factor infertility. Since the very beginning of this process, Husband and I have acknowledged that we will ultimately need to do IVF. Shouldn't we just get this show on the road?

We had tickets to another ball game on the night of AF's arrival, so we re-visited our strategy between innings while sipping down some much needed beers. By the seventh inning stretch, we had decided to stick with the original game plan. If we're still un-pregnant after the in-law invasion and the Hawaii trip of family fun-ness, we'll start IVF in October. We both had different reasons. Thanks to my fellow bloggers, I have gained an understanding for the realities of IVF that is more accurate than anything I could have read in a textbook or absorbed in a lecture. We were already far too wise to entertain thoughts that we could start IVF now and deliver the good news to both sets of parents at the rare opportunity when we would all be together. We know IVF does not equal instant baby. Now we're savvy enough to know that protocols can be unpredictable, cycles get cancelled, retrieval rates can be low and fertilisation rates disappointing. Transfers can get delayed.  It is best to prepare for the unexpected. Once we start this process, it's going to be a full commitment and we want to avoid all potential obstacles.

Husband's thinking is that if we stimulate and retrieve in the final months of the year, we can apply our 2013 Flexible Spending Accounts (FSA) to those costs and the we can use the 2014 FSA earmarks for our transfers. I so appreciate how he can view the plan of action so simply in terms of numbers and dates.  For me, it's more of an emotional decision, although I'm reluctant to reveal that I'm letting my emotions consume so much of my thought process. I'm already feeling apprehensive about the visit with my parents and in-laws, but I feel it could be much worse after a disappointing cycle or failed IVF treatment. Not to sound co-dependent, but I am going to need alcohol and possibly some category 'D' anti-anxiety meds to get through these two weeks. I feel it's important for my body to be in an optimal state of health before starting IVF, so getting past the stress of the in-law visit is an important component. Although the Hawaii trip with my parents, in-laws, aunt, uncle and cousins, is not an ideal vacation, I feel we've earned the right to make the most of it and to find ways to have an enjoyable, relaxing and fun time. Oh, and I will collect $20 from Myrtle, who bet me that my in-laws wouldn't go and that I'd be pregnant by the time of the trip. At one point, I felt uneasy about turning my infertility into a bet, now I see it as contributions to my Mai Tai fund.

We're going to do two more IUI cycles in July and August, with an option for a third and final one in September. Mostly, because it's much easier and less stressful than scheduled coitus, and reasonably priced. My financial figure conscious Husband is still hoping to avoid the costs of IVF, while my personal figure conscious self is hoping to avoid the weight gain from hormone supplements. We're hopeful idiots. As we conceived spontaneously after seven meager attempts on our own, maybe it will only be a matter of time with professional assistance. We shall see...