On her Majesty's Secret Cervix


Acknowledgements to The Daily Show with John Stewart for my post title.

I've been mulling about whether or not to write about the birth of the Royal baby for the past few days. As I like to think my blog carries a more serious tone, it might not be fitting; but the event is rare enough (fortunately) to be worthy of a few timid musings. The pregnancy announcement and eventual birth announcement for the Royal Couple was perhaps one that didn't meet with any jealousy. Well technically, I was pregnant when the world learned that the pregnant Duchess was affected with hyperemesis gravidarum. Myrtle sent me a text commenting that I would be due around the same time. I truly didn't care one way or the other. I actually felt badly for Kate. Firstly it sucks to have hyperemesis gravidarum, and I'm sure that wasn't the way she wanted to announce her news.

It's difficult enough to deal with all the changes pregnancy brings to your body, but I can't imagine what it would be like to have thousands of cameras aimed at your developing bump. I can't imagine what it would have been like to experience each contraction and with every push to know that that the world is waiting for your baby's arrival. I can't imagine the pressure her doctors, nurses and staff at the hospital were feeling. I'm sure it was the most nerve-wracking day in their careers. At the same time, I scoffed a few months ago when I learned that she had made her last public appearance before her maternity leave. Maternity leave? It makes it sound like she has an actual job like the rest of us. I rolled my eyes when ever I heard soundbites gushing over her fashion style. Sure, if I had an unlimited budget and a team to shop for me, I'd look glamourous too. How does one balance the privileges of Royalty against the burden of being in the public eye?

Interestingly, the one person in the world who seemed uninterested in the arrival of the Royal baby is the baby's Great-grandmother. A few weeks ago the Queen was quoted as saying that she hoped the baby would be born soon, as she was getting ready to leave on holiday. Least the birth of her great grandchild interfere with her travel plans. Seriously, she couldn't schedule at a different time? Although it seems like this baby will want for nothing, maybe he will be denied the things that riches cannot buy.

In the senseless interest of dishing Royal gossip, I know the Queen amused the world at the Olympics Opening Ceremonies with her participation in skit where James Bond escorts her to the stadium. Husband and I were watching from a pub in London and although we'll never forget the moment when everyone gasped to acknowledge that it was the Queen herself, I think the sketch truly addressed the legacy of the James Bond character. However, when it was written into the script that James would lean down to give one of her Corgi dogs a scratch, (a swooning moment)  she requested to have a stunt dog employed. Yes, she would not let Daniel Craig pet her dogs...

One night while my parents and I were at a cafe in Paris, we met a retired policeman who served on the security detail for Tony Blair and had also covered the Royal family at various times. He described that he found the Queen to be "lovely" and thought she had a sharp sense of humour. He found Diana to be "fake", she was a darling in front of the cameras, but very difficult in person. He also commented that she was a "shagger" and noted that it was widely speculated among the security team that "the ginger one" was not Charles' biological child. Although many reports collaborate that her affair with James Hewitt began after the birth of her children, the resemblance is quite striking. 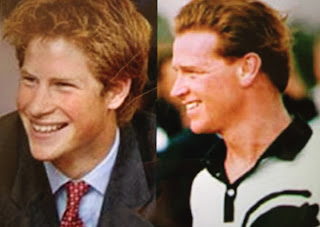