It Comes in Threes...

Husband was on the east coast for a hockey tournament over the Thanksgiving weekend. I don't like it when he is away. Firstly, I really miss him, which must mean that I truly do love him. Secondly, I fear that anything electronic will break while he is gone. Myrtle gave me the first season of Call the Midwife for Christmas last year.  As Husband has absolutely no interest in the series, it would be the perfect opportunity to finally watch it. However, I'm afraid that if I try to work the DVD player, I might not be able to watch regular TV again. Somehow, it's not just as easy as pressing the 'source' button. Sadly, one of the reasons why I hope this pregnancy takes is so I can have someone else to work the electronic devices in our house.

It is often noted that things seem to break down in groups of three. The shower in our master bathroom started dripping. I tightened the faucets and tried putting a washed behind the head, but it continued to drip. It was really irritating to hear the sound of water splashing on the tile as I was trying to sleep, but I really don't sleep that well  when I'm on my own. I'll get in on my usual side off the bed, but I'll wake up in the middle of the night and find that I'm on Husband's side of the bed and my cat is stretched out next to me. I would like to participate in a sleep study so I can see how a 12 pound cat can move a 150 pound human.

Every now and then there will be a spree of break-ins around our neighbourhood, which is the other reasons why I don't sleep as well. I just feel a little more vulnerable when I'm alone, which also involves broken item #2. Our alarm kept coming up with a message of "chimes disarmed" for the door leading into the garage. I looked up in the instruction manual but couldn't find anything about re-arming the chimes. I figured that if a would-be intruder were to enter through the garage, he or she would probably be maimed by the junk lying around. Nonetheless, I decided to place my tool box in front of the door.

The third thing to break down was my transmission. My car is a 10 year old Jetta with almost 140,000 miles. I struggled to accelerate from an intersection and I was hoping that I had accidentally left it in third gear, but I knew I hadn't. I managed to drive home, and took it out later that night and could appreciate that the clutch kept skipping. Once again, I'm at a crossroads deciding what to do with this car. I accept that regardless of what progresses inside my uterus, we eventually need to replace this car. However, I'm still not ready to let it go. It's a heap of crap, but I love it. Oh, and as we'll be paying off our IVF expenses for the next 21 months, it would be stretch to work a car payment into our budget. Fortunately, we have a good friend who is also an amateur mechanic and he replaced my clutch 55,000 miles ago. Even better, his fee is $500 and a six-pack of beer. So hopefully he can resuscitate my car again and we can sustain it for at least two more years.

Fortunately, Husband came home on Tuesday and repaired the cracked pipe that was causing the shower to leak and fixed the alarm in about two seconds. The other bright spot of my week was that I received these socks from Rach at A Little Bit More. Thanks to Risa for initiating the sock exchange! 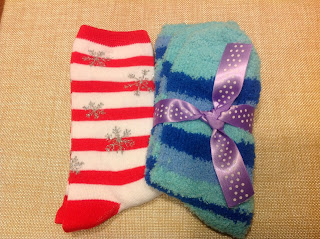