Membership has its Privileges

I appreciate that many of you have commented that it must be difficult to work in obstetrics. The response I give to people who inquire IRL is that some days are harder than others. For the most part it doesn't really bother me, I've been working in this field for such a long time and for most of those years I wasn't trying to procreate. Actually, there were times when my work almost seemed like a deterrent for getting knocked up. I'd see a very uncomfortable post term patient and feel relieved to have an empty uterus. Even after I started trying to conceive, I saw a few patients with significant vaginal varicosities and almost changed my mind about pursuing pregnancy. I'm not easily squeamish, but that is one of the few things that can get to me. Seriously, if they want to reduce teen pregnancy rates, these school programs need to show photos of vaginal varicosities. Years back, when I was working on the Labour and Delivery unit, I had a medical student following me (who very well could have been my RE). After performing a routine delivery with him, I checked in to get his impressions. "Um, that just completely killed my libido" he revealed. ...and my work here is done!

I was happily living in the moment and wasn't thinking about what could be going on in my uterus, until last Wednesday when our LVN presented a particular patient. By her last menstrual period she was 5 weeks and 6 days, just two days ahead of me. Her ultrasound revealed a single fetal pole that measured 6 weeks and 3 days with positive cardiac activity. The patient admitted that she merely guessed at the date of her last period, as is often the case with women who aren't actively trying to conceive. She reckoned it may have been a week earlier. Yet, I now couldn't stop thinking about what I might see on a scan at this point.

I decided to take the plunge and scan myself. Although my betas have been suggestive of a singleton, I wanted to know about the possibility of twins as soon as possible, preferably to avoid losing my composure in my RE's office if he were to make such a discovery. Additionally, as the gestational sac arrested around five weeks last time, I thought it would be useful to document this early stage. In fact, my RE might even find it helpful, I tried to convince myself. If for no other reason, I figured there must be some advantage to working in this field when you're infertile.

Husband was at a hockey game, which allowed me to work a bit late. I waited until everyone in the office left and then dragged an ultrasound machine into an empty exam room. For those of you who are curious, I did it standing up with my foot on the counter. There was one small sac present with a slight decidual reaction. I couldn't get a view of the sac in the transverse view, but based on the two measurements I obtained, I calculated a size corresponding to 5 weeks exactly. Four days behind where I should be. The next day, I showed the photo to one of my colleagues, who seemingly gave me a 'let's wait and see' smile. 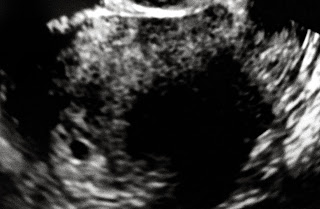 I still couldn't wait until my officially scheduled scan. Fortunately, the office clears out much earlier on a Friday afternoon, and I was alone with the ultrasound again. The sac was definitely a bit bigger -2.5 mm to be exact, and I was able to get a measurement in the transverse view. The measurement was corresponding to 5 weeks and 2 days, still running 4 days behind, but there was appropriate progression. I thought I could faintly detect a yolk sac. Most of all, there is definitely only one gestational sac, but as I've missed two monochorionic twins on a scan before six weeks, I'm still holding my breath. However, the advantage of day 3 embryos is that they are less likely to split into identical twins. 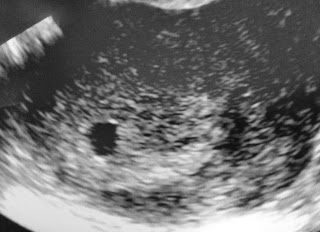 Shamelessly, I went back into the office on Sunday to catch up on charting/scan myself again. Sure enough, the sac had appropriately increased in size. It was now measuring 9 mm (5 weeks 4 days). Yet I still couldn't clearly identify a yolk sac and there was no fetal pole. By my transfer date, I should be 6 weeks and 1 day. My official ultrasound was originally scheduled for Monday, we moved it forward a day as Husband had a scheduling conflict. It was less than twenty-four hours before they were expecting to see a embryo with cardiac activity in my uterus. 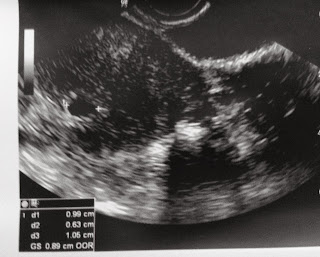 They say don't ask a question if you don't want to know the answer. I learned that this is (most likely) a singleton pregnancy, but I now have doubts if it will be viable. I'm honestly not sure what to make of the sac measuring four days behind. We are taught that any measurements within a week of a last menstrual period are considered to be within normal limits, presumably to account for variations in time of ovulation, implantation, etc. There is no ambiguity here, we know the exact moment when the embryos were placed in my uterus. However, a gestational sac will often measure a little smaller than a fetal pole, which is why it's measurement is considered irrelevant once a Crown-Rump Length can be calculated. I also know that a gestational sac will progress in size when it is a blighted ovum. I would feel more reassured if I could clearly see a yolk sac. Or better yet, a fetal pole.

Now I'm back to waiting for my RE to perform my official ultrasound, although I think the resolution is actually better on our machine, which is much newer. I feel satisfied in a few respects. I confirmed that there was one sac in my uterus and it progressed appropriately over four days, which was further than I was with my previous pregnancy. I remember when my Lead Physician was discussing her miscarriage and she commented, "you'll tell yourself things that you wouldn't say to patients." I fear the four day lapse in corresponding measurements is an ominous sign. I am hoping that my inability to see a yolk sac is due to the limitations of scanning yourself. I searched the infertility forums; it seemed that for every incidence of slow growing gestational sac that became a viable pregnancy, I could match it with a story of an eventual miscarriage. Searching my own case files, within this past year I had two patients who had empty appearing sacs when each should have been much further. I suspected a blighted ovum, but to my surprise a follow up scan revealed a viable embryo. However, I know I also have had many more cases where things didn't add up early on...and we would discover there was a reason why. As with so many things pertaining to this IVF cycle, nothing is straight forward and nothing is easy. Yet, I'm still in the game. I'm still at the plate. I'm just behind in the count.

I decided that I needed to do some actual work to justify having the security guard let me in to the office on a Sunday. On top of my scanning pile was an ultrasound picture from someone's first OB visit. My documentation confirmed that I saw a yolk sac and cardiac activity and the CRL measured 0.47 cm. Just in case I needed to be reminded of what a scan should look like at 6 weeks and 1 day. I received an email message from the patient I had scanned earlier in the week. Not really trying, unsure of dates; she measured 6 weeks and 3 days when she should have been only 5 and 6. She was now inquiring about terminating her pregnancy. Sigh. Some days are harder than others.
Posted by jAllen at 16:18