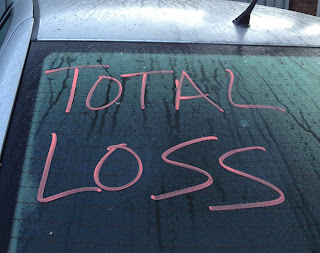 On an early episode of How I met your Mother, the central character was facing a dilemma. He had received a wedding invite addressed to 'Ted Mosby and Guest', where 'Guest' represented a potential girlfriend or date. For the bride and groom, who merely needed the information for seating arrangements and numbers for the catering staff, it was a straightforward question. For the recipient, it was asking a much larger and broader question. 'Number of people attending' was really asking the late twenties bachelor to consider where he pictured himself in three months time. Involved in a relationship with a woman who would be his plus one? Or still single, where attending the wedding stag could lead to meeting someone for a possible relationship, or at least a one night stand. Decisions, decisions...

We found ourselves in somewhat of a similar cross-roads regarding my car. As you may recall, during my no good, very bad week, my car got a little too cosy with a concrete post in a parking garage and significantly dented the passenger side doors. Not that anyone welcomes the unexpected cost of car repairs at any time in their life, but it's especially draining when you're facing infertility treatments, as no one ever really factors those expenses into their budgets. My car is a ten years old VW Jetta with over 125,000 miles, so we were waiting to hear from the insurance company as to whether or not the car would be written off. Husband drives a 2006 SAAB two door convertible. It was his present for moving to America/pre mid-life crisis car. We finished paying for both cars a few years ago. When abstractly talking about having a child, we have addressed the need for a larger vehicle (such as an SUV) but haven't really figured out what we would do. Husband admits his car is less practical and has a higher trade-in value as it is in great condition and has nearly half the mileage as mine, but mine will likely need replacing sooner.

As the picture notes, the car was declared a write-off. The body shop suggested by our insurance estimated the repairs to cost $4,450. Our insurance company presented two options; they could claim the car and give us $5,500, or we could keep the car to get repaired and they would give us $4,100. The real decision for us was, 'do we see ourselves needing a family sized car, and is now the time to get one?'

Well, we are optimistic that we will need the larger family sized car, but we decided that now is not the time. The reality is that we can't look to the foreseeable future without acknowledging our situation in the present. Even with $5,500 toward a down payment, we would be looking at around $450 a month for a car payment. I'm fortunate that my insurance covers 50% of IUI treatments, but that amount is what we budgeted to cover our out-of-pocket expenses for the four cycles we plan to do. Eight months of car payments prior to our anticipated start of IVF would be $3,600 -approximately the cost of meds.

It's interesting how various stages of your life guide how you look at particular costs. When Husband and I first met, I took note how he answered when a friend asked if he wanted to go to a comedy show on the University campus. "No, it's 4 quid. That's 2 beers." During our home renovations, we would stretch our leftovers as a $60 restaurant tab represented four boxes of tiles. Now we are defining various costs by infertility treatments.

Additionally, I wasn't ready to say good-bye to my car just yet. It still runs very well. The brilliant German engineering has resisted my attempts to ruin the motor by letting a month or two (or six) lapse between oil changes. I replaced the clutch three years ago, and just four months ago I purchased four new tyres and shocks. It also holds a lot of sentimental value. When I was in college, I had a very cool boyfriend who drove a manual transmission red Jetta and it inspired me to have one. I made the purchase before I could actually drive a stick shift (my dad took it for the test drive) as I felt like an inferior driver and I was determined to master that skill. My father and I later drove the car cross country together when I moved to California.

We decided to collect the cheque for $4,100 and took the car to a different body shop, who quoted $1,200 plus costs for parts. The job was completed for $1,350, and we also received an $80 credit from our insurance company as we were able to drop the comprehensive coverage for my car. We ended up having over $2,000 to put toward the other unexpected expense of our infertility treatment -my hysteroscopy. The total loss turned out to be our gain.