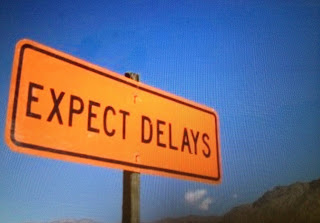 I know I'm not as seasoned as others who have been travelling down the infertility road for a while, but I'm not a newbie either. I've often thought about what advice or words of 'wisdom' I could offer someone who is just starting out on this journey. The answer came to me when I was driving and took note of a traffic advisory sign: DENSE FOG: EXPECT DELAYS. 'Expect Delays' seems to be the perfect expression that captures our experience thus far. It gives me pause to laugh a bit, as I feel that I've tried to be proactive through this process. I started using Clomid early. When we didn't conceive after 6 months (although it had been less than 6 attempts) we started our work-up by testing Husband. It took over a week before he could even schedule an appointment with the urologist. I had to call the office manager directly and express how embarrassed I was that my husband couldn't schedule an appointment at the affiliation where I work. By June, I attended an informal open house and met my RE, but I had to wait for insurance authorisation and didn't have my first appointment until early July. Husband was referred to a male fertility specialist and in August, he was started on Clomid. IUI was deferred for three months to wait for the Clomd to take effect (which really didn't happen) We were ready to start in November, but had a surprise BFP, which unfortunately resulted in a miscarriage. I thought I would only have to wait one cycle before getting going with IUI treatments, but it was discovered that I have a uterine septum which needs to be resected. Fingers are crossed that   I'll be able to schedule my hysteroscopy in February, and then will probably need to wait another cycle to recover. If all goes well, we may be doing our first IUI in April. Exactly a year later from the point when we realised we needed help and started our evaluation.

From joining the forum and connecting with other bloggers, I know my experience is not unique, and there are many others who have been waiting much longer. Delays seem to be an inevitable part of this process. Cysts happen. Inadequate response cancels cycles. Meds don't arrive in time, lab work gets missed. Finances constrain. Holidays and provider vacations push treatments back. It seems that if it's not one thing, it's another. Just as natural conception requires a series of events to occur and align at the right time, the same can be said for assisted reproduction. Learning to be patient is probably one of the most difficult skills to acquire during this trying time. It reminds me of the final scene in When Harry met Sally. After professing his love to Sally, Harry explains, "and it's not because I'm lonely, and it's not because it's New Year's Eve. I came here tonight because when you realize you want to spend the rest of your life with somebody, you want the rest of your life to start as soon as possible."