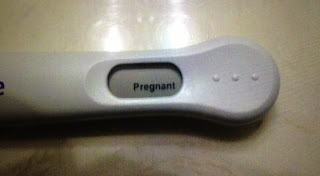 It was Sunday morning and there was still no sign of AF. I was annoyed with myself for using the progesterone supplements to manipulate my period. I needed my period to start yesterday or today as I had an appointment with my RE on Monday to scan my uterus and ovaries in preparation for my first IUI cycle. Despite the previous challenges with the holiday weekend, some logistics were working in my favour. Just before the appointment, I had a department meeting right next to my RE's office and I was already scheduled to be out of my office. There was no need to lie about a "dentist" or "eye doctor" appointment.

Just as I did every morning of AF's expected arrival, I started the day by peeing on a stick. I set the test on the counter and sat on the closed lid of the toilet to read my email. I glanced over at this stick and saw the single pink line. I replied to a few messages and then got ready to throw the stick away. I took a closer look at it, there appeared to be a faint blue line! I immediately started running another test, and then a third, and forth and fifth. The blue line appeared on all of them! I thought the only way I would ever see a blue line on a pregnancy test would be to draw one on! I looked at myself in the mirror and began to laugh "HOLY SHIT!" I exclaimed! I knew who I needed to call first. I called Myrtle, who was immediately excited for us, and resisted any 'I told you so' comments about conceiving on our own.

I knew husband was busy with his hockey games so I emailed him a picture of my positive test. I had an appointment for a bikini wax (in anticipation of my appointment) which I decided to keep. My phone rang four times while I was getting waxed. I figured he had seen the email. I called him as soon as she was done. "Is that what I think it is?" he asked. When I confirmed it was, he admitted he had a few tears in his eyes. I quickly reminded him that it was too early to get excited. This could be a chemical pregnancy, it could be ectopic and given my age, the possibility of a miscarriage is very real. I knew I would discover what the outcome would be in the next few days or weeks, but for at least that night, I could feel happy. I was pregnant -it said so on the digital test. At least I had this moment. I had the knowledge that I can get pregnant -on our own too! We were now one of those stories friends could tell about someone who conceived right when they were due to start treatment. No matter what lies ahead, I knew that nothing could take away the joy I felt at that moment.
Posted by jAllen at 06:54